Mental Health Therapy and the Autistic Client: When Clinicians Don’t See the Autism (It’s All the Autism)

When Clinicians Attribute All Psychiatric Symptomatology to the Autism

Autistic people find their way to therapy when symptoms of depression, anxiety, OCD and other diagnoses become problematic to them in their daily lives. When a client has been previously diagnosed with autism it is common for mental health clinicians to attribute all psychiatric symptomatology to the autism, which often results in autistics not being diagnosed or treated for comorbid mental illnesses when warranted.

As clinicians we need to understand the autistic operating system – in other words, to see the autism – if we are to be helpful to our autistic clients. When we do not have a strong grasp on this the results are that our clients are not served well. Clinicians without a good understanding of autism generally make one of two mistakes. One mistake is not seeing the autism at all, but instead seeing individual characteristics of autism and matching them with a clinical diagnosis. The other mistake is, once the autism has been diagnosed every symptom that point forward is attributed to the autism. 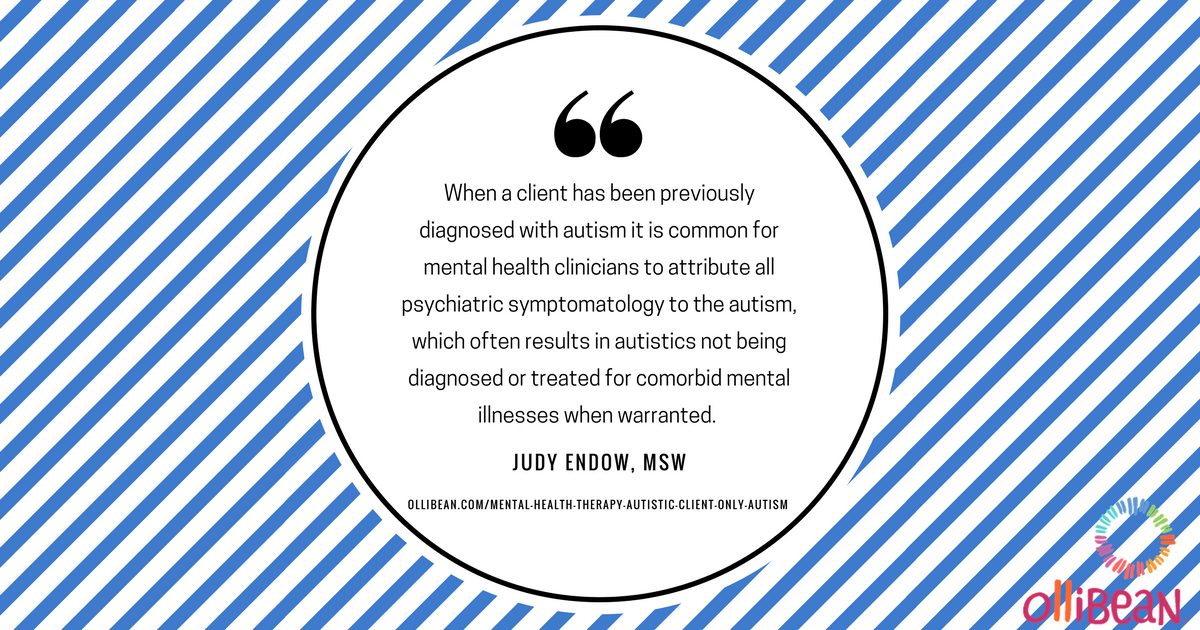 Today we will look at an example of when clinicians think, “It’s all the autism.”

Example: Elaina was a 9 year-old autistic girl who was in a fourth grade. She interacted with her visual schedule tracking her day, which included some classes along with Speech and OT. She had two friends she ate lunch with and played with at recess. At home, Elaina and her 8 year-old brother each did household chores, participated in dinner conversations about their day and attended church on the weekend.

Elaina started hitting. First she occasionally hit her teachers. Within a few weeks she was also hitting her peers at school and her parents and brother at home. Her family stopped going to church because Elaina could not attend children’s Sunday School class unless one of her parents attended with her to keep her from hitting other children. In fact, Elaina’s life became smaller and smaller as her parents stopped taking her out into the community.

Initially everyone in Elaina’s life attributed the hitting to her autism. The school team worked very hard trying to change this behavior, but to no avail. Elaina saw a psychiatrist who prescribed a psychotropic often used for children with uncontrollable behavior. Other than making Elaina drowsy for a few weeks, the medication did not change her hitting behavior. Whenever anyone asked Elaina why she was hitting Elaina would say, “Don’t hit!” and would say that she would not hit again. The psychiatrist referred Elaina to a therapist.

Over the course of several sessions it was discovered that Elaina suffered from anxiety. When her anxiety felt unbearable she would hit. The hitting ensured people would back off which gave time and space for anxiety to come down.

How was this discovered when Elaina could not tell why she was hitting?

From the first session the context was set using a visual timer and a visual written schedule for the session. Her schedule was the same each time – check in with mom, set timer, therapist’s choice and Elaina’s choice. Elaina had the last 10 minutes to participate in a pleasurable activity of her choice. The therapist provided three choices of activities Elaina enjoyed and that were easily accomplished in the allotted time.

During the therapist’s choice time the therapist would have Elaina recall a specific hitting incident and then cartoon that event. To start Elaina could tell about the act of hitting. Once it was drawn with stick figures and word bubbles, which Elaina was great at making accurate, she was then able to tell other pieces of the incident. These pieces were not told in chronological order so Elaina’s story didn’t often make sense to the therapist. The therapist took to drawing each piece of the story on a sticky note so Elaina could see it and decide if this piece came before or after the hit. Thus, more and more pieces were elicited. Soon there were enough pieces to tell the story in chronological order so that it made sense.

It became apparent that Elaina was experiencing a high degree of anxiety for the half hour or so before the hitting occurred. Therapy then became focused on teaching Elaina and the adults around her the signs of her anxiety, which were subtle, along with teaching Elaina relaxation techniques geared toward bringing her anxiety down. An app was used that read Elaina’s heart rate so she could see it and then watch it come down as she employed one of her relaxation techniques.

Additionally, this app was used for Elaina to check periodically (it was right on her schedule) to see her heart rate. Elaina and her therapist developed a chart that showed which relaxation techniques to use for each heart rate range. Elaina was able to manage her anxiety this way for several months, the hitting lessened and then altogether stopped. She was discharged from therapy.

Three years later, as middle school student, Elaina returned to therapy. Her anxiety management needed some assistance. At that time she was started on a low dose antianxiety medication and her relaxation techniques were reviewed, some revised and some new ones added. The area of mindfulness was explored and added to Elaina’s daily routine. Additionally, new information on the eighth sensory system – interoception – was looked at, along with the interoception activities from the book Interoception: The Eighth Sensory System by Kelly Mahler.

(Note: It has been my experience when a behavior is extinguished without understanding and addressing it’s function individuals most often come up with a replacement behavior that is of increased intensity. It serves nobody’s best interest to simply extinguish a behavior, even though this can and is done to autistics quite frequently.)

When clinicians do not have a good understanding of the autistic operating system they tend to lean toward one of the two mistakes of either attributing everything to the autism or not seeing the autism at all. Neither is helpful in supporting therapeutic progress of autistic clients. The Autistic Operating System delves further into this topic.

Mental Health Therapy and the Autistic Client: When Clinicians Don’t See the Autism looks at the other easily made clinical mistake with autistic clients – when we do not recognize the autism because we can’t see the forest for the trees! Over time these clients tend to wind up with multiple psychiatric diagnoses for which none of the typical treatments have been effective in lessening symptoms. These clients’ individual symptoms are sometimes collectively better known as autism, but because the autism hasn’t been recognized we miss the boat in rendering effective treatment.

Going forward we will delve into learning about autistic operating system and how to deliver mental health therapy to clients who happen to be autistic. Hope to see you back!