I am writing this in March because I want everyone to start getting ready for April, which was declared by non-Autistics to be “Autism Awareness Month“.

Why am I doing this?

Because Autism Awareness Month is the month when all those so-called autism advocacy organizations double, triple down on using our neurology to raise money by advertising how terrible it is to have an Autistic person in a family.

Because Autism Awareness Month is the month when ableism is so pervasive, I feel like the world is openly letting me know I am unworthy and undesirable.

Because Autism Awareness Month  is the month when Autistics who need more support than society deems “reasonable”, Autistics like me, are singled out as the “biggest epidemic ever”, and as the reason for more money thrown into research that don’t seek to improve our lives, but to find ways to make sure people like me are prevented, are never born.

Because  Autism Awareness Month  is the month when openly talking about, and advocating eugenics due to neurology is not only acceptable, but also encouraged and supported.

Because Autism Awareness Month  is the month when ABA practitioners, proponents of seclusion and restraints, use their voice to advocate for more torturous practices to “fix” us. These practices actually break us, as an excuse to make us act “normal” or, at minimum, in an “acceptable” way, for the comfort of the neurotypical majority.

And after they break us, they blame us for the constant discrimination against us – by saying how much we burden our families.

Because  Autism Awareness Month is the month of the neurotypical mass hysteria about the numbers: “1 in X children are diagnosed ‘with autism’” – calling us a health crisis, an economic crisis, a reason for more eugenics advocacy and torture apologism.

Becaus Autism Awareness Month  is the month of endless walks that lead to nowhere, of “special” TV events to try to “understand autism”, of parents’ public tears that come with a very explicit message that everyone needs to listen and sympathize with those parents’ suffering, the “ordeal” people like me put them through. Of course, this happens all year long but in April the whole world is called upon to public praise parents for their “heroic” act of parenting Autistic children. If some dare not to do this, if someone dares to respect Autistics, this is declared to be an attack on the parents.

Because Autism Awareness Month  is the month when our humanity is reduced to platitudes, memes, walks and puzzle pieces; when our dignity is completely ignored so that parents can expose us, deny us privacy, by telling the world anecdotes about us in order to attract sympathetic looks and social media “likes”. Again, this happens all year long but in April the invasion of our privacy becomes a duty, a duty to disrespect us that is beyond reprehension.

Because  Autism Awareness Month  is the month when neurotypical people unabashedly excuse themselves for the abusive silencing of Autistic voices. They feel good making us feel bad, and they don’t even pretend to care: they are, after all, “raising awareness”. Privacy, dignity, respect – those don’t fit in the April agenda.

Autistics have been fighting back against “Autism Awareness” and celebrating AUTISM ACCEPTANCE but despite some changes, the silencing still thrives.

So, March is THE MONTH TO BEWARE OF AUTISM AWARENESS MONTH.

It is our time to prepare ourselves to fight for our right to be.

Beware of those who “celebrate” dismissing our humanity.

Autism Awareness Month was never about Autism, or Autistics. It has always been a pity-party-fundraiser on the backs of our right to exist as we are. 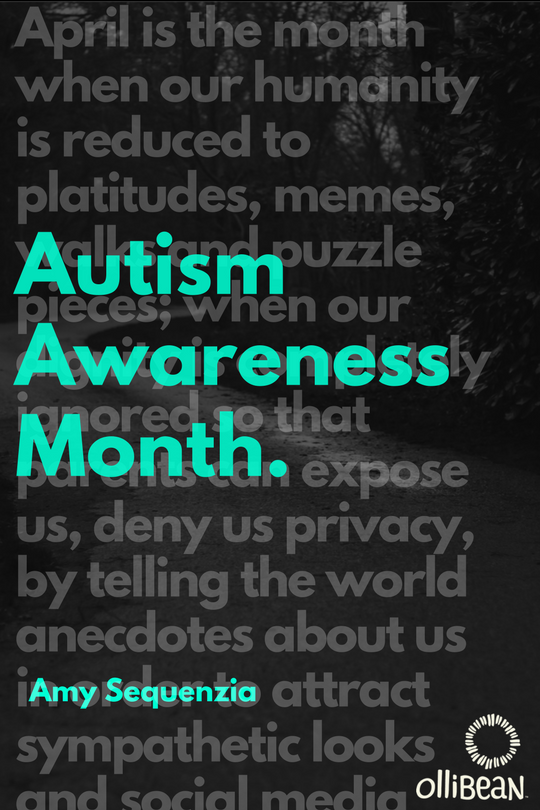