Intelligence Is an Ableist Concept

Intelligence Is an Ableist Concept, by Amy Sequenzia.

Warning: use of the R-word. 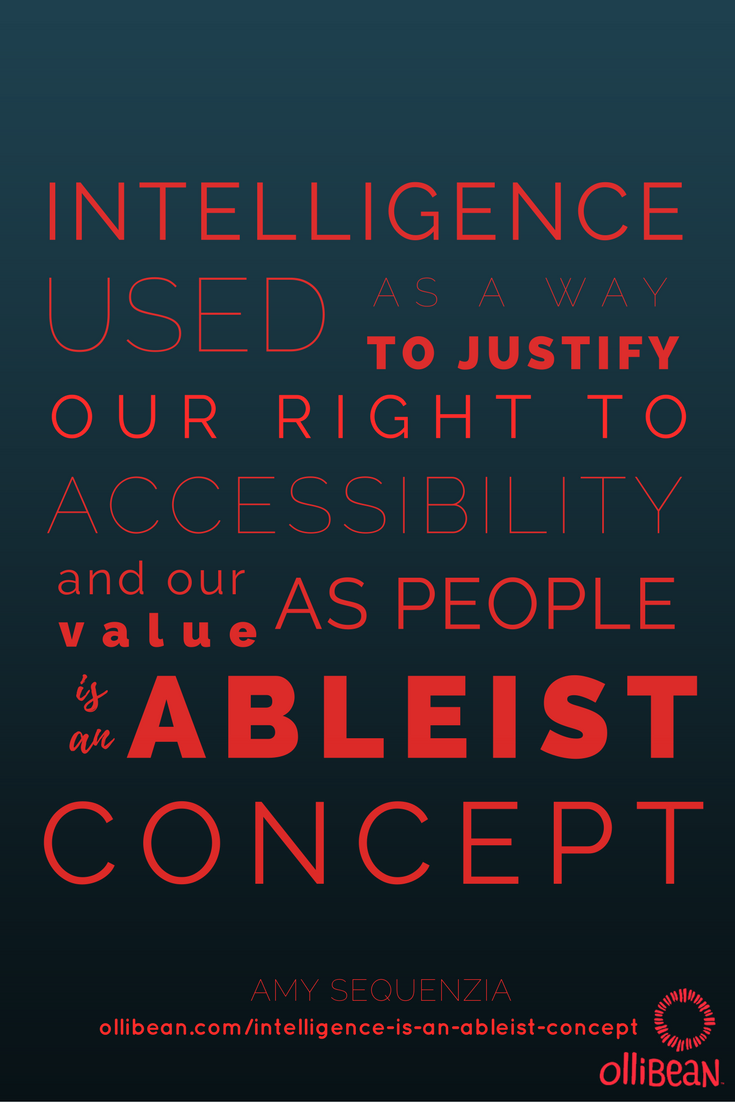 Too many times I see the word “intelligence” in articles that are supposedly about disability rights.

The word comes up to explain that being disabled does not mean that there is a “problem” with the brain. Many times this happens when a physically disabled person, or someone talking about physical disabilities, want to point out that “their minds are fine”.

The word is also used to tell stories of non-speaking Autistics who learned to type to communicate and “proved” that they are “intelligent”.

I used this when I was young too. I kept using it until a few years ago. Being a disabled person who needs many supports, and who had been physically and verbally abused because I was so “retarded” might have been part of why I felt like I needed to say “I am intelligent”.

My parents and my family also liked to say how “intelligent” I really was. The reason might be because of all the years of feeling frustrated with the prognosis of a tragic future given by all the doctors. Having a daughter that had finally “proved her intelligence” might have felt like vindication.

Being Human Should Be Enough to Deserve Rights

Today, I know better. I know that being human should be enough to deserve rights. I know that the reason I type is not to “prove” that I am “intelligent”. I type because I have words.

People who have intellectual disabilities are assumed to be “not intelligent”. By using “intelligence” as a reason why we deserve accessibility and respect, we are ignoring and harming those who have intellectual disabilities, the ones who are still not valued, the ones whose voice is still not understood, and actively ignored.

I do understand that most people don’t think about concepts and constructs when talking about intelligence, or when saying that someone is “so intelligent”. But the word can, and is, used to harm and exclude some disabled people, including myself, and people who look a lot like me.

1.The ability to learn or understand or to deal with new or trying situations.
2.Reason; also : the skilled use of reason.
3.The ability to apply knowledge to manipulate one’s environment or to think abstractly as measured by objective criteria (as tests)
4.Mental acuteness.
5.The act of understanding : comprehension

The part about “dealing with new situations”, is so subjective, it does not make sense. Dealing with new and trying situations involve emotions, and emotions have too many variables. This so-called “intelligence”, measured by an I.Q. test, has nothing to do with it.

2. I think I can use reason but if I am skilled enough will also depend on a lot of other factors, including the willingness of others to see my point of view, something that is out of my control.

3. I can only apply my knowledge if I have supports. I am able to learn but sometimes what I learn stays in my head, and I cannot translate my knowledge into action. Even when I can show what I learned, I still need a lot of help. But then again, Stephen Hawking also needs a lot of help to let us know his thoughts. Without all the supports he has, we would not be able to know what he wants us to know.

5. As I said, I can understand things but cannot always express them. Or I need more time to understand them, or to process and be able to show I do comprehend.

The Merriam-Webster dictionary definition is:

There are many problems with standardized tests, as they are usually developed to evaluate speaking people with what is considered average motor coordination. According to the definition above, the idea of IQ is pointless: it is relative, it cannot be measured by an arbitrarily created metaphorical stick.

It also fails because measuring what one should know at any given age is also arbitrary. Many disabled people like me have been institutionalized, and not given any education. Without access to information, how can a test grade our knowledge of said information?

According to an I.Q. test I was subject to, I am “severely retarded”. I had a “mental age” way below my chronological age. Doctors’ observations did point out that I “seemed to be absorbing information” but “got easily distracted.” In a way, the same people who gave me the test acknowledged that the test was flawed.

Am I “intelligent”? I don’t care. I am me, and I deserve the same rights as any human being. If I am not respected as a person, “incredible super intelligence powers” will not change that.

Intelligence, used as a way to justify our right to accessibility, and our value as people, is an ableist concept.