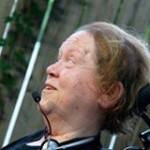 Judith Snow’s vision is to create communities in which everyone is included and can fully participate.

For a summary of Judith’s ground-breaking work, see the biography on her Facebook page.

The following video is Part One of a talk that Judith gave at Citizen Advocacy of Atlanta and DeKalb in 2010.

So I think I should start by saying a bit more about who I am and what I’m good for because I’m not good for that many things, and then you can talk to me about what you’d like to know about. I find that it’s really odd to come into a group of people, most of whom I’ve never met before, and just to start talking. What I need is to find out what you’d like to know about. Okay? So I’ll say something about me and then I’ll ask you to tell me what makes sense to you.

Um, I’m kind of famous for the fact that in 1980 when I was uh, oh, pushing thirty…actually, past 30…I left a chronic care hospital and became the first person in Canada to have individualized funding so that I could hire my own people to allow me to go out and work and live in the community and do the things that I really wanted to do with my life.

I’m not sure that this crowd wants to know that much about it, but if there is someone who is, I’m up for talking about that.

The thing I think you might want to talk about more is that along the way, after I got out of the institution, I was really, really, impressed with how much the people who were into citizen advocacy understood how important relationship is. And I was also really angry that the people who were into citizen advocacy always seemed to stop at a certain point. And that point would be: They’d make one friend, and that was about as far as they’d go. So you’d have a protégé, which is the word that you folks use, but you don’t always, and I’m not blaming anybody here, by the way, because I don’t know…but quite typically the citizen advocate stops there and doesn’t go on to introduce that person to other people.

And the reason that kind of got me, that does sometimes does get me, upset is because I know that wouldn’t be here if other people hadn’t introduced me to their friends.

So it kind of goes like this: Um, the world of people who are labeled disabled is a world that’s very isolated. And it’s a world where we are considered to be people who need help…people who are broken in some way or another…and people who are potentially even dangerous to society. And the world that the citizen advocate comes from is what we call citizenship.  Okay? And in many, many ways, the citizen advocate is the first door to that world of citizenship that the person has ever encountered. But if you’re not a door, if all you are is the endpoint, then not much can change for the person who’s labeled, right? So I’m really, I’m very interested in talking about that with you.

Along the way in the 80’s I got very, very interested in what disability really is. And ultimately I’ve decided that it isn’t real. There is no such thing. So I’m very excited always to talk about that, if you like. But basically I don’t think I’m disabled. I don’t think anybody is, and I think that the whole idea is a crock, and the sooner we give it up, the better for everybody.

And finally, about four years ago I started to notice that there’s a lot of peacefulness that comes out of being in a relationship with somebody who’s very different from you.

And it’s such a common occurrence…well, I’ll give you an example. The research shows that when a child who is not academically gifted is included in a regular school, not only do the academics improve across the school, and I did say that, I didn’t say “in the classroom”, I said “across the school”, not only do the academics improve, but drug use and violence goes down.

So a really possible way to limit and perhaps even end violence at school is to have an inclusive school. And there’s evidence that that’s the case. Now this is part of what’s real about our world is that even though that evidence has been there since 1985 or earlier, nobody’s going to tell you about it…except we’re going to change that. But it’s not in the public domain, that information. So as parents, or people who care about children and education, that’s a fact you should know, right? And yet you don’t.  Or you didn’t.

So, um, I’m really interested in that peacefulness aspect of inclusion and very happy to say more about that if you like. All right?

So the bomb still has functions.  And people in Southeast Asia use bombs as building materials to hold up houses, for example.  Um, and disabled cars have functions.  People sell flowers out of disabled cars in Toronto, if you know…they park them on an empty corner somewhere and sell flowers, or sometimes homeless people live in a disabled car.

So if I say to you that a person is disabled, I am actually saying to you that they are not functioning as a person.  Which is not to say that they have no functions – because obviously ninety adults arrive every day at that place and basically do the same thing every day for the rest of their lives and, um, a bunch of people get paid and other good people like you get to volunteer and do service…I’ll put rabbit ears around that, quote-unquote, “service”…

And so there’s lots going on, but what we really mean in our society by “person” is basically 3 things. One is that you are in relationship and that you are accountable for relationship. So when you are a person, you have lovers, friends, colleagues, neighbours, children, that sort of thing, and you are expected to function in relationship, right?