Supporting United States Ratification of the U.N. Convention on the Rights of Persons with Disabilities – Why Every Voice Counts!

CALLING ALL SENATORS .It’s time for the U.S. To take their seat at the table In support of global disability rights . RATIFY THE CRPD

I have a confession to make:

I can only vaguely recall skimming the e-mails that made their way to my inbox in late November and early December last year that called upon the disability community to contact their senators in support of U.S. ratification of the U.N. Convention on the Rights of Persons with Disabilities (CRPD). It’s not that I didn’t realize the importance; I just thought to myself “Oh, I should help. But what does it matter if I don’t contact senators? I’m just one person and I doubt my voice will make a huge difference.” However, after living and breathing pro-CRPD activism every day for the entire duration of my summer internship, I’m deeply disappointed in myself for having previously believed that my advocacy efforts wouldn’t be heard.

I find that the “I’m just one person and I won’t make much difference” mindset is found all too often in cases of advocating for disability rights. Though the disability community spreads far and wide to all corners of the earth (as we are the world’s largest minority group) we do not all band together to advocate for important causes nearly as much as we should. But now, along with so many other advocates, I’m calling on everyone in the disability community – those who have disabilities, allies, and even people who just have good old-fashioned common sense – to move beyond the idea that other people will pick up your slack when it comes to rallying for United States ratification of the CRPD. It is everyone’s responsibility to join together and advocate. Call your senators. E-mail them. Tag them in a tweet. We’ve got to reach out as much as possible to make the truth about the positives of the CRPD known! The disability community must actually embrace the idea of working together as a community to educate opponents of the CRPD and to dispel the campaigns of myths and inaccurate propaganda against the CRPD.

So, what can you do to help get the CRPD ratified?

If you’re like I used to be and have the initiative to advocate but don’t quite know where to start, there are so many fantastic resources online, which I’ll provide links for at the end of this post. Keep in mind that the most important thing is to first educate yourself on the invaluable merits of U.S ratification of the CRPD. Get the facts! Take some time to read through the information. Then, spread the word! You’ll see that many disability rights advocates have done the hard work and research that will help you reach out to senators! Just use the wealth of available facts on the CRPD so you’ll know exactly what to say. There’s even a phone script with talking points (that I’m proud to say I wrote), pre-written tweets, and form e-mails. Advocating in support of the CRPD is really simple!

Our work is far from done and we can’t stop showing senators how crucial it is to ratify the CRPD. If you live in a state where your senators already voted in favor the first time around, it’s still important to reach out and ask for their continued support and assistance in reaching out to senators who don’t support ratification. And if you live in a state where your senators voted against ratification of the CRPD, then it is absolutely critical to advocate for the facts about the CRPD and help put an end to misinformed opposition. Let’s show the senators who voted against the treaty just how much the disability community needs their support! Remember, you may think you’re just one small person, but if we all work together, we can help the U.S. ratify the CRPD and work towards achieving immense positive change in global disability rights.

Helpful Links to Get Informed:

http://disabilitytreaty.org/ A website on the CRPD (also known as the Disability Treaty) hosted by the U.S. International Council on Disabilities

http://aucd.org/template/page.cfm?id=853 A wealth of resources and information on the CRPD hosted by the Association of University Centers on Disabilities (AUCD)

http://www.state.gov/j/drl/sadr/disabilitiestreaty/index.htm Information on the CRPD from the U.S. Department of State

http://wecandothisifwetry.blogspot.com/ A blog that explains facts about the CRPD in simple terms

http://www.usicd.org/index.cfm/convention Full Text of the CRPD

http://www.c-c-d.org/fichiers/CCD_Inter_TF-Neglected_and_Abused_Abroad.pdf Neglected and Abused Abroad: A Look at the Severe Mistreatment of Individuals with Disabilities Around the World and How the U.S. Can Help

Helpful Links to Get Involved:

http://www.aucd.org/template/news.cfm?news_id=9186&id=17 Sample tweets in support of the CRPD

http://www.aucd.org/template/capwiz.cfm Action center where you can access a phone script and send tweets and e-mails to senators hosted by AUCD

http://www.facebook.com/Students4crpd A great Facebook group to join the efforts of younger advocates! 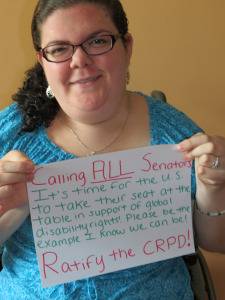 Image description : Young caucasian woman with curly brown hair off to the side wearing purple glasses and a turquoise floral-patterned shirt. She is holding up a sign written in pink and green ink on white paper that reads: “Calling all senators: It’s time for the U.S. to take their seat at the table in support of global disability rights! Please be the example I know we can be! Ratify the CRPD!” 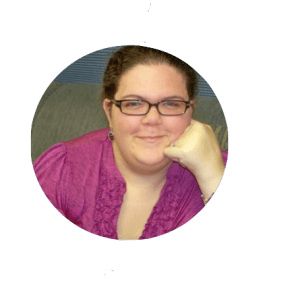 Ollibean Author Emily Ladau is a passionate self-advocate and is pursuing a career in which she can use her communication and writing skills as a means of positive change for all disabled people. Emily’s areas of interest include encouraging all disabled people to become self-advocates and researching portrayals of disability in the media. Currently, Emily maintains a blog on her experiences with her disability, “Words I Wheel By,” at http://wordsiwheelby.com. She’s always happy to connect with people, and you can follow her blog on Facebook (http://facebook.com/WordsIWheelBy) or follow her on Twitter (@emily_ladau).

About the Author: Emily Ladau

Emily's areas of interest include encouraging all disabled people to become self-advocates and researching portrayals of disability in the media. She is a passionate self-advocate and is pursuing a career in which she can use her communication and writing skills as a means of positive change for all disabled people. Currently, Emily maintains a blog on her experiences with her disability, “Words I Wheel By,” at http://emilyladau.wordpress.com. She’s always happy to connect with people, and you can follow her blog on Facebook (http://facebook.com/WordsIWheelBy) or follow her on Twitter (@emily_ladau).