Treat Others As THEY Want to Be Treated 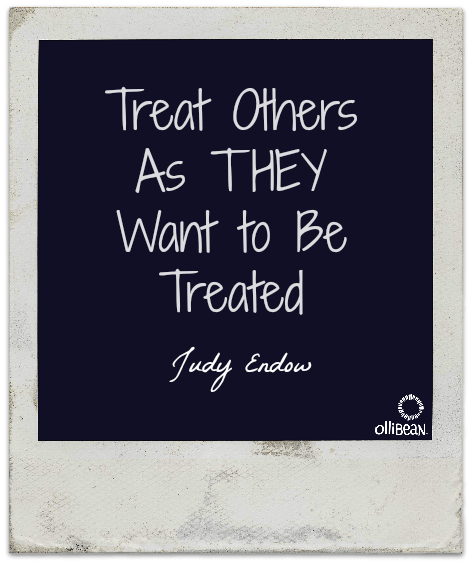 I was taught to treat other people the way I want to be treated. This works out great when I am with autistic friends because we share an autistic neurology. It does not always work out well when I am with everyone else who populates this world from a neuro-majority place of being. Therefore, the onus has been on me to figure this out for myself. It has taken many decades, but I have finally worked it out in a way that allows me to live more comfortable in a world largely populated by folks who do not share my neurology.

It works out for most of the population to treat others the way they would like to be treated only because they share the majority neurology. What this admonition actually means for autistics is learn how other people want to be treated and then treat them that way. This is tricky because other people never actually tell you how they want to be treated, but instead expect you to automatically know this information and act on it. Furthermore, when you don’t treat them the way they want to be treated – even though you can’t because you don’t have this information – they make all sorts of negative assumptions about your intentions and character. Often times relationships sour, job opportunities are lost and many doors get slammed in your face.

This changing-your-ways-to-fit-in is called passing. My take on this is that it is morally wrong to have to pass to be given opportunities. And yet, because I cannot change the world around me, I like having the power to pass when it is in my best interest to do so. It can be a powerful tool in terms of being and doing what I want in my life. My sense of comfort and control over my own life has increased as I have learned the hidden curriculum information the neuro-majority operates from – and the real truth from my vantage point is the hidden curriculum makes the world go round, not love!

If this is not your cup of tea, please read no further. However, if you are interested, here is one important truth I’ve learned along the way. I am passing it along as I believe we can learn vicariously – from each other’s experience – rather than each of us having to learn everything by first hand experience.

If you want to pass as a “REAL PERSON” in the “REAL WORLD” the single most important thing to do is to take up telling lies. These lies are not just any sort of lies. I think of them as image specific lies. It seems important to neuro-majority people to pretend they are a more ideal version of themselves than they really are in everyday life.

What works for me to be able to treat neuro-majority people in this way deemed “appropriate” by them is for me to think of a fairy tale figure with imposed super hero powers and then act as if my friend truly is the pretend image. This means that every attribute for appearance and functioning is always favorable – even if in reality that is an outright lie. Somehow supporting these sorts of lies gives a neuro-majority person points in the self-esteem department, boosting their happiness and general sense of wellbeing.

Some common lies considered good, “appropriate” and beneficial to tell to neuro-majority people have to do with compliments.

Here is an example:“You look __________.” (Insert positive descriptors such as lovely, beautiful, fantastic, wonderful for females and dashing, handsome, like a stud for males.)

Rotate compliment descriptors so as not to use the same descriptor with the same person over and over. Saying, “you look beautiful” five times in a row even though each time is separated by days does not sound genuine. And even though your comment is, in fact, not genuine, it needs to sound genuine if you want to support the needs of neuro-majority person. It is in your own best interest to support them because the neuro-majority has the power to issue tickets to autistic people for participation in life.

Deliver the lie as if it were the ultimate truth. This means have an enthusiastic, firm voice and put a genuine smile on your face. To come up with the right kind of smile I think of something pleasant rather than a joke because I have learned that a joke kind of smile can negate all your effort up to this point at accommodating the neuro-majority need for these image-lies. It may help to practice in front of the mirror.

When delivering lie-compliments do not use comparative wording such as you look less fat or more beautiful than last time I saw you. Neuro-majority people will take this wrong for so many different reasons. For example even though I mean it as a compliment when my friend asks, “How does this dress look?” it will not be perceived as a compliment when I say, “It makes you look less fat than the other one.”

Also, comparative compliments in the other direction will not work out well. An example is “You look more beautiful than last time I saw you.” Neuro-majority people do not have it in them to accept these sorts of compliments. They immediately interpret this kind of compliment to mean “How bad did I look last time?”  Your intent does not matter. It will not be taken into consideration. Neuro-majority inflexibility will rule on this point.

It is also important to refrain from looking sheepish once your comment has been delivered. Even though it may go against your morals and values to tell such a bold-faced lie, DO NOT LOOK GUILTY. Even though your extreme efforts in the delivery of such a lie make it only reasonable to feel very guilty DO NOT LOOK GUILTY. It will only negate all your effort.

Remember, neuro-majority people want to be lied to in this manner. They expect it from one another. In fact, they expect it from everyone, including you. They actually perceive this as “normal.” If you want to pass you need to keep up the acting by assuming a smiling “normal” appearance after you have delivered your lie-compliment. This is because neuro-majority people do not have autistic theory of mind. They are quite limited and deficient at being able to sort out what to expect from an autistic person.

Remember, neuro-majority folks are considered the “normal” people because their neurology is dominant by 50 to 1. They get to set the rules and allow or bar the folks with the minority neurology. They are considered the “REAL PEOPLE” in the “REAL WORLD.” Even though this reality is not my truth, if I want a ticket to ride I must play the game. I like being able to go out into the world to interact with others and to be part of my community. I find it necessary to maintain employment.

While I consider it morally wrong to be made to pass I enjoy a place of privilege in that I have a choice. Others do not have this choice as they come in unruly bodies. And even though I have a choice it comes with a great cost in that I need to spend considerable time in solitude in order to be able to go out the door into the world and pass enough to get by. Even so, it is better than the alternative I lived growing up – residing in an institution.

These days when I hear the admonition about treating others the way you want to be treated I realize it really means to treat others the way THEY want to be treated. I have gone to great lengths to treat others in the way they want to be treated even though it is foreign to me. I think it is respectful to treat others in a way they find comfortable. I do not often see this sort of respect extended back to me as an autistic person, but am hopeful that in time autistics will experience the sort of respect that one human being gives to another. The truth is we already are real people in the real world even though we have largely been divided out into that place of “other.”

Judy is an autistic author and international speaker on a variety of autism related topics. Read more from Judy on Ollibean here and on her website www.judyendow.com.