Surviving Inclusion: At The Intersection of Minority, Disability and Resegregation

Kerima Çevik on Surviving Inclusion: At The Intersection of Minority, Disability and Resegregation

“I see the work of inclusion as probably the last frontier of desegregation. If you read the brief from Brown v Board of Ed, The board of education argued that if we let the blacks be integrated then the next thing you know is that we’ll be letting people with disabilities be integrated.” 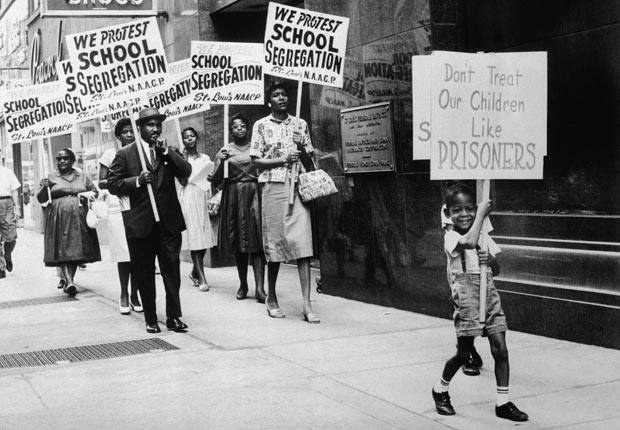 In October of 2008, we discovered that our son, who was transferred into a full special education placement despite our protestations and after succeeding in a mixed population school, was also in a kindergarten class segregated by race.

The idea that the school district in our former county would deliberately track nonspeaking children with intense support needs from a Less Restrictive Environment (LRE) where the student showed academic progress to the most restrictive environment simply to escape their legal obligation to provide the supports and staffing these students required to be included in public school classrooms with their peers was abhorrent enough. The added blow that 54 years after the Brown v Board of Ed decision my husband and I sat gaping in horrified shock at the only other kindergarten classroom in his school and realized that in a county and school district that was so disproportionately African American and non white that most of the faculty and staff of that special center were themselves people of color, all the white special needs kindergarten students were in a single classroom that was better equipped and even had a white teaching staff was a blow I still have not recovered from.

Bus attendant helps our son from his chair onto the school bus in PG County, spring of 2008 Photo @Kerima Cevik

Worse, when called out about it, staff and administration responded to our concerns with “it isn’t racism.”  “They do it for ease of annual data collection”, “we find that Black special needs children learn better from teaching staff their own color”. Yes they actually said the last extremely racist statement to us.

Segregation in special education schools was not dead. By the way, the kindergarten class with nonwhite students was labeled the under-performing class and given the lesser staff. The excuse being that among the severe and multiply disabled student body it was critical to give those who “had hope of improvement” the better resources. Note that the presumption of incompetence when choosing between students with equal degrees of disability was determined by race and ethnicity. Just so everyone understands. The only county in Maryland with more African American people than Prince George’s County is Baltimore. This is because initially, African Americans of affluence chose Prince George’s county as a site for an experiment in Black gentrification. Later, its proximity to the District of Columbia allowed for an influx of African Americans fleeing the rough conditions in DC’s impoverished wards. The idea of one classroom containing 5 white multiply disabled students “with hope of improvement” and no exceptionally performing nonwhite students is statistically so ridiculously low as to make this probability improbable.

Segregation continues to be the dirty little secret of public education.

Our son’s situation is not unique.  Our public schools have never been successfully fully desegregated in practice. Segregation continues to be the dirty little secret of public education, a practice that leaks out to the public in bizarre sound bytes like a group of students from a Georgia high school’s act of defiance in holding the first non segregated prom in the school’s history in 2013, which you can read about here.  Then there is the re segregation of Tuscaloosa Alabama’s high schools.

The resurgence of the segregation problem is expressed in forms that unmask any attempts to hide what is actually happening. Red flags scream at us in the quick and quiet rezoning of school districts, neighborhoods, and people by race. Single gender education presented as a roadmap to saving the male students of color, “white flight”, a persistent, pervasive achievement gap and a resurgence of self-segregation along racial, gender, religious, and socio economic lines are symptoms of failed attempts at desegregation that perpetuate the racism, ableism, and the very disparities in education meant to be resolved though desegregation in the first place.

The institutionalized racism that perpetuates resegregation of public, charter, and non public schools is a major reason why nationwide full inclusion has been so challenging to achieve to date. Inclusion activists using the idea that American schools have been desegregated therefore full inclusion is the logical last step, should really rethink that rhetoric.

What we have succeeded in doing in 60 years is establishing a solid legal foundation in Brown V Board of Ed mandating desegregation, and a strong disability rights foundation in the Americans with Disabilities Act. As long as bias is built into the institutions of this country, disparity in education will continue in every marginalized student population.

These disparities victimize intersected populations of disabled students in particular because their families are already historically under-served and have less access to general education or special education schools with the resources their children need to succeed. Their children are zoned into school districts with low performing and low service schools and parents, who often are raising their multiply disabled children in nontraditional family constellations, are forced to accept whatever placement is pushed on them because they simply do not have the time or resources to escalate complaints or push to due process hearings.

Families do not realize the illegality of illicit discriminatory practices within public school systems like school districts mandating limits on the number of aides a school can request, something that is actually supposed to be determined by the individual needs of each special needs student, not the school’s target budget. They don’t really grasp that IEP teams are violating the civil rights of multiply disabled students by tracking them from an LRE where they showed scholastic progress to a MRE where they are tracked away from high school diplomas and into low demand high risk, highly segregated environments away from their peers and communities.

When discussing inclusion, critical issues like intersectionality and the disparities in education resulting from a combination of individual differences among equally divergent pupils and how those differences are marginalized and sometimes criminalized in the intersected group are only just now being openly addressed because maltreatment of disabled students, particularly autistic students, has now escalated and expanded to all autistic students rather than simply autistic students of color. Now tactics used for over 60 years to segregate, disenfranchise, and discourage academic achievement in students of color are being openly applied to divergent students by assumed degree of disability regardless of race, ethnicity or social class.

Because the same injustices in school discipline that feed the school to prison pipeline with students of color are being now applied to students with disabilities, it behooves inclusion activists and advocates to address reforming school discipline issues in addition to the ongoing fight against seclusion and restraint that impact both at risk students of color and students with disabilities requiring supports the schools don’t wish to provide.

What can you do?

1. Look at the your school district. Are they segregating students of color? If they are, chances are they will not include your multiply disabled children in a general education classroom with their peers. So join those shining a light on re-segregation. I define re-segregation as inclusive of special education isolation from peers.

2. Vote against the erosion of civil rights laws meant to preserve diversity in all its forms.  People don’t grasp that these are laws also serve as precedent in the legal battles for all students who are not the dominant majority. Understand that when a law that protects civil liberties falls this will impact your family too, whether you are white and otherwise privileged or not, because you see, your loved ones are disabled and that makes them a very marginalized minority.

3. Vote for school boards and superintendents rather than allowing county administrators to assign these positions. And get out the vote for effective people. They are the body that manages the policies and actions of schools in a district. Insure your school board includes people of color and people with disabilities. Representation is the only cure for racism and ableism.

4. Remember when something bad happens to people of color today, it can happen to anyone who diverges from the dominant majority tomorrow. Injustice against one is injustice against all. Don’t remain silent against this in your places of worship, schools, and communities. Because discrimination of anyone different is like the Red Death in Edgar Allen Poe’s story. The Red Death came regardless of wealth, position, and the closing off of a lower town of suffering people while Prince Prospero and the wealthiest class danced at a masquerade ball. Injustice, like The Red Death, does not discriminate, In the end it comes for all of us.

Kerima Çevik is a legislative advocate and a parent activist for autism and social justice. She is an independent researcher who speaks at autism and disability rights conferences and workshops. She is currently promoting the concept of Pay it Forward activism and autism community building through resource generation, crowd funding of crisis mitigation, and leveraging social media. She blogs about autism, disability rights, and life with her nonspeaking autistic son at The Autism Wars (theautismwars.blogspot.com), intersectionality at Intersected (intersectedisability.blogspot.com), social justice at Brave (overcominghate.blogspot.com) and is the founder of the Amplify Autistic Voices project at (amplifyautistics.blogspot.com).

About the Author: Kerima Çevik

Legislative advocate and a parent activist for autism and social justice. She is an independent researcher who speaks at autism and disability rights conferences and workshops. She is currently promoting the concept of Pay it Forward activism and autism community building through resource generation, crowd funding of crisis mitigation, and leveraging social media. She blogs about autism, disability rights, and life with her nonspeaking autistic son at The Autism Wars (theautismwars.blogspot.com), intersectionality at Intersected (intersectedisability.blogspot.com), social justice at Brave (overcominghate.blogspot.com) and is the founder of the Amplify Autistic Voices project at (amplifyautistics.blogspot.com).