Three young Black soldiers, bubbling over with the news that the Civil Rights act was just signed into law, and ready to demand a front door entrance and equal treatment everywhere rushed around places where people of color were formerly unseen and unheard.

Image is of the first page of the Civil Rights Act of 1964. Credit National Archives.

I cannot impart on you what this moment in time meant to them. Imagine being told all your life that you were less than others. Imagine approaching your local supermarket through the rear entrance or not at all. Paying higher prices for lesser produce. Being made to walk miles or blocks because you were not allowed to use a public toilet designated for whites only. Imagine being at a public park and your child telling you they are thirsty, seeing a public drinking fountain right in front of you and having to tell your child that they cannot drink from that fountain because if they do they will be arrested. Then explaining to your child that this will happen because they are a skin color that society has branded less. All of those feelings, humiliations, and maltreatment bubbled over. They rushed everywhere, sitting at lunch counters, bursting into the front entrances of shops. Filled with righteous indignation, they pushed their way into a busy barbershop in an affluent all white neighborhood demanding haircuts. The white owner stared and them in surprise and answered honestly, “Gentlemen, I have no qualms about giving you all a haircut, but before I begin I should warn you I’ve never cut your type of hair in my life. I therefore cannot guarantee the quality of the results!” One brave soul sat in the chair anyway. This was a matter of principle! The others watched carefully as the barber tried to do his best. It was done. They paid for the haircut. Sheepishly looking at their brave volunteer, they fairly ran out of the barbershop so the white patrons could not see them roar with laughter at the disaster that was their friend’s freshly barbered hair. Or rather what was left of it.
“We’ll go back to base and get you a crew cut,“ my stepfather whispered. The barber quietly asked who was next from inside the shop, with a quaver in his voice.
At which point my stepfather and his stalwart brothers in arms and social justice stared at one another nonplussed. They then decided to adjourn to Ben’s Chili Bowl to eat instead, and continue to fight for equality another day.

Gail Etienne age 6, one of the Mcdonogh 3, being driven to school  by federal marshals looking very sad. Photo credit: NOLA.com

Four years before my stepfather’s wild run through Washington, D.C., four 6 year old Black girls faced angry mobs of hate to gain the right for all children of color to learn in the same schools as white children did. People like praising and discussing the courage of Ruby Bridges, the first Black student to integrate an all white elementary school. They inevitably forget that Ruby was one of a group of young students. “The McDonogh 3” were also integrating another school at the same time Ruby was. They were just as brave and just as traumatized. A hidden fact in the history of mandated integration and the brave little girls the NAACP volunteered to be first is the story of a civil rights ally, a child psychiatrist named Robert Coles and how he stepped in to help the girls. Quoting Pop History Dig, Coles worked  “with Ruby Bridges and other children in the early school desegregation cases in 1961.  Coles had found that segregation had damaged the self-esteem of the little girls, and by 1963 he had written a series of articles beginning in March for The Atlantic Monthly magazine profiling Ruby Bridges’ experiences during integration of the Frantz school.  He also published The Desegregation of Southern Schools: A Psychiatric Study, a short book.”

The parallels in the experience, trauma, and history of the fight for desegregation and the fight for inclusion continue to fascinate me. Notice when Ruby Bridges and The McDonogh 3 integrated the Louisiana public school system it was 1960. The Civil Rights Act was not signed until 1964. So while these children were legally allowed to attend white schools, they weren’t necessarily allowed to drink from white drinking fountains or do any number of other things in the segregated South until four years later. Even then, even now, demanding your right to personhood in any setting where you are the most marginalized group could and can cost your life or your mental health.

In the parallel universe of inclusion there are two groups of destinies. An attorney, who self identified as pro inclusion, clueless about his own ableism, insisted that there was no place for severely disabled, high support need, nonspeaking students in a general education classroom. In his world of inclusion, when he and those in that particular school system said inclusion they meant inclusion for what is called high incidence disability. This means students with mild learning challenges who can blend into general education classrooms and may even in time be indistinguishable from their peers. In fact, most schools, and many professionals mean those students when they say disabled and when they say they are pro inclusion.

The other group is the students categorized as having severe or multiple disabilities. Those young people may require extensive support but also demand their legal right to an inclusive classroom. It is this group, the group tracked to segregated schools and locked classrooms away from their peers, that knows what segregation and the denial of personhood truly is. They know what I mean when I try and express what my stepfather and his GI buddies felt that day. They wait for their day of respect fervently. Like The McDonogh 3, those who choose to try and be the first to demand acceptance and equal access to a general education classroom with their peers know derision, hate, and ableism.

I mention this because to my knowledge no ally psychiatrist is out there considering the impact of segregated education and closed classroom learning on the self esteem of those multiply disabled students who have attempted being the first disabled student in an inclusive classroom setting. Professionals aren’t considering the trauma of inclusion into school settings where the student is unwelcome or even hated by administration and peers. School psychologists do not seem to be engaged to help these students adapt. IEP teams and administrators often resent inclusion and see it as an expense or burden to the school. These groups view inclusion as an educational disaster, as racist educators saw racial integration in its time.

How can we complete this messy transition to nationwide inclusive public school systems without harming disabled students who will never be indistinguishable from their peers along the way?

We have some example of successful inclusive schools. The Haggerty School in the documentary Including Samuel,  The Swift schools model  or the IDEAL school, and public schools like those in Howard County, MD, where all classes have team teaching with one special education teacher and one general education teacher and study rooms used for pull out time and sensory breaks.  Ironically, we don’t have something that Ruby Bridges and the McDonogh 3 had in 1960. We don’t have allies who know what damage both segregated education and failed transition into hostile inclusive learning environments can do to disabled students caught in this transition. We have no allies who are willing and able to work with disabled students to overcome any potential harm done them. We also don’t have the gift my stepfather and all my people were given in 1964. We have failed to push for an enforceable piece of legislation that mandates fully inclusive education in public schools regardless of degree of disability. 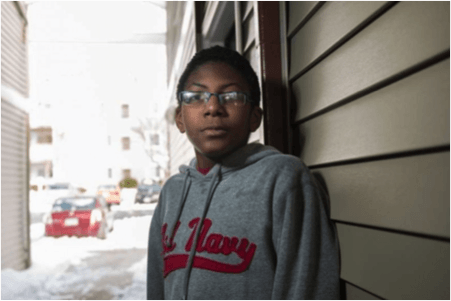 Shocking as the idea of reforming the status quo standard of the “least restrictive environment” or LRE may sound, full inclusion will never be achieved as long as any loophole exists to justify segregated education.

1.What empowered my stepfather and his peers that summer day in 1964 was the understanding that federal law was finally there to enforce their right to personhood in American society. Special Education law, the foundational mandate that would make full inclusion enforceable has no teeth. This makes achieving the right to a free and appropriate education with their peers nearly impossible for disabled students, particularly those who are not in high incidence populations and will always be distinguishable from their peers.

2.We do not have the ally support that helped Ruby Bridges, the McDonogh 3, and so many others survive desegregation with their mental and emotional health intact. The hate directed at these girls is the same hate directed at disabled children trying to survive inclusive classrooms today. Kayleb Robinson is an example of the disastrous consequences of placing a disabled student in an environment of racism, ableism, and lack of transitional support in the name of inclusive education. At age 11, he has been made a convicted felon. He is the public face of a hundred disabled students of color. Parent and peer professionals must champion these students with both legal and mental health supports. If this does not happen, failed attempts at inclusion will become self-segregation as parents remove their disabled students from the public school system to avoid the school to prison pipeline at worst, and students forced to weather poorly delivered inclusive education settings are left with anxiety and PTSD at best .

3.Successful Inclusive schools like the ones mentioned in this article are not being used to assess what works and what doesn’t. Instead, parents are fighting to get their children in them from all over the country. There has to be an affordable, executable, data supported model that will work with both high and low incidence disabled students across educational settings, meaning in Title 1 schools as well as blue ribbon school districts.

4.The short form of items 1-3 is we, the parents, activists, advocates, and students who know inclusion is the right thing to do, need to build a national inclusion roadmap that works for all schools. Full inclusion is one of the stepping-stones to educating others in the personhood of our children. We must free them from marginalization as my people did are continuing the fight to do for themselves. Remember, Brown v Board of Ed of Topeka and school desegregation began four years before the Civil Rights Act.

About the Author: Kerima Çevik

Legislative advocate and a parent activist for autism and social justice. She is an independent researcher who speaks at autism and disability rights conferences and workshops. She is currently promoting the concept of Pay it Forward activism and autism community building through resource generation, crowd funding of crisis mitigation, and leveraging social media. She blogs about autism, disability rights, and life with her nonspeaking autistic son at The Autism Wars (theautismwars.blogspot.com), intersectionality at Intersected (intersectedisability.blogspot.com), social justice at Brave (overcominghate.blogspot.com) and is the founder of the Amplify Autistic Voices project at (amplifyautistics.blogspot.com).