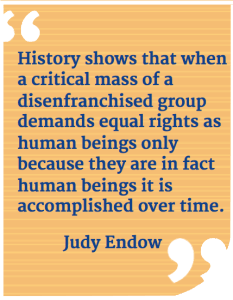 Sometimes I am told that because of my autism I am not capable of feeling empathy. This is an erroneous belief about autism that has been shown not to be valid. In 2013 we now know better, but this knowledge hasn’t caught up to include all people in the larger autism community.

Never-the-less parents who connect empathy and the “walk-a-mile-in-my-shoes” phrase are EXACTLY right. These two concepts do go together. To walk a mile in someone else’s shoes requires a person to have empathy. Even so, whether or not you believe autistics are capable of empathy doesn’t even matter in this case.

The reason I say that is because the thread that these news articles have in common is the stomped on human and civil rights of autistic people. We are not treated with the same rights as other human beings. This is seen over and over, week after week even though the topics of the news stories change.

* Feeding a child worms to intentionally give them intestinal parasites is  considered child abuse if done to any child except an autistic child.

* Murdering one’s child of any age is a terrible crime. Whether or not you believe in the death penalty, it is the punishment rendered by law in some of our states. In other states life without parole or a very many year prison sentence is given. This is because in our civilized society we consider the murder of our own children a reprehensible crime unless that child is autistic, in which case he is blamed for his own murder while public sympathy goes to the criminal murdering parent.

* Holding down a screaming child to intentionally induce internal chemical burns by administering a bleach enema is considered child abuse if done to any child except an autistic child.

These three examples along with the newest news item regarding the debarking of a teen with autism should not be about empathizing with the parents. Walking a mile in the parent’s shoes is about empathy for the parents. While it is wonderful to empathize most of the time it is not wonderful to empathize in any circumstances where the civil rights of a human being may have been violated.

There is an easy way to begin to sort this out and here is how to do it:

3. When a crime is committed empathy goes to the victim even when the victim is autistic. This should go without saying, but unfortunately, it needs to be said.

5.  A medical treatment, procedure or surgery for an autistic should only be considered if it is also used on other people. If it is something performed on animals, but not on people then it is not okay to carry out on an autistic. Again, this should go without saying, but unfortunately, needs to be said – autistic people are not animals; they are human beings.

For example, my one time neighbor had her dog debarked so she could keep her dog in her apartment. Even though her child made more noise than the dog, debarking of her child was never considered.

Note: It is irrelevant whether or not this child was diagnosed with an autism spectrum disorder.

Click the link below to read the news on September 27, 2013 with the opening sentence of
“Doctors at UW Madison have found a way to quiet down autistic children who scream loudly and often…”

Likely there will be comments on this post about empathizing with the parents because that is where we are in public discourse about these kinds of news articles at this point in history. I hope there are also a few comments about the human rights and civil rights of autistics.

I know it is difficult for many in today’s society to consider us fully human with our own rights, but it is important to think about and talk about it if you want to be part of the conversation as time marches forward. History shows that when a critical mass of a disenfranchised group demands equal rights as human beings only because they are in fact human beings it is accomplished over time.

It takes a long time, but it is eventually accomplished. Even though adult autistics are still largely ignored or otherwise ridiculed a critical mass is developing. More of our voices are standing up and speaking out against the atrocities committed on our people.

So, talk amongst yourselves. Discuss the issues. Know autistics will be back to weigh in again on whatever news story pops up next. This will be an important conversation for as long as it needs to be.

Have a great week,
Judy