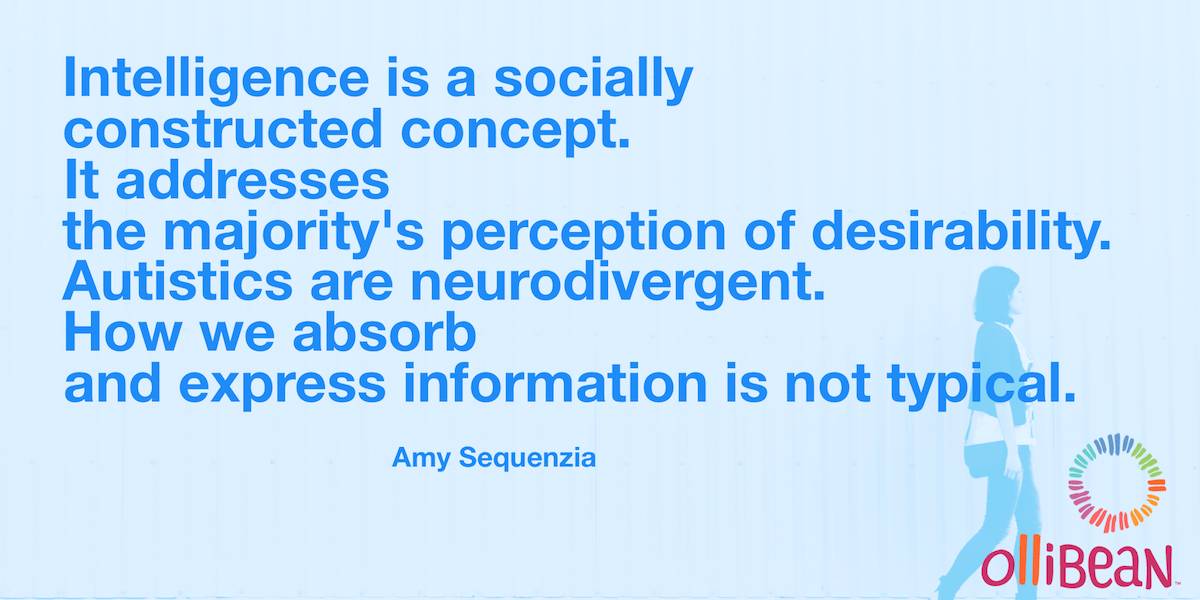 “Being Autistic is not the same as being intellectually disabled”.

“When non-speaking Autistics learn how to type they can ‘prove’ their intelligence'”.

All the statements above are true. They are also incomplete.

Statements like these are assumptions that do not help in making the world more respectful of all disabled people.

They are incomplete because some non-speaking Autistics might also be intellectually disabled;

Because some Autistic people might be Autistic AND intellectually disabled;

Because while some typists are able to show that the assumptions about their IQ were wrong, being able to type is a way to make it easier for neurotypical people to understand us, it is simply another way for us to communicate.

I know how hurtful it is to be presumed incompetent, to be called “retarded” just because we cannot speak, or because we usually move differently, or look like we are not paying attention.

I can understand how eager we are to show the world that we can have complex thoughts, that we understand things, that we have opinions and feelings.

I was, and still am, eager too.

Intelligence is a socially constructed concept.

I feel some frustration when I see a fellow typist saying that they can finally “prove” that they are not intellectually disabled.

It is the same frustration I feel when someone tells me that I am “clearly” not intellectually disabled.

When we focus on “intelligence”, we risk endorsing the normalizing concepts of value and worth, consequently devaluing a lot of Autistics, non-speaking Autistics, and other disabled people who can’t, or don’t want to, “prove” their intelligence.

Some of us don’t care about this arbitrary concept called “intelligence”.

Some of us will never be interested in academic knowledge.

Some of us will never want or be able to go to college, or even to get a real high school diploma.

Some of us just want to be heard, even if what we say is perceived as not accurate, not “well-thought”, or intellectually immature.

Some of us are, indeed, intellectually disabled.

Intelligence is a socially constructed concept. It addresses the majority’s perception of desirability.

Autistics are neurodivergent. How we absorb and express information is not typical. We are not the majority, we don’t “fit” the majority’s concepts of “normal” and “desirable”.

Neurotypical Definitions of  Intelligence and Success

I don’t want to be valued by the nondisabled, neurotypical definitions of success.

I don’t have a PhD, a college degree, or a high school diploma.

Degrees, jobs, being a taxpayer are worthy goals for anyone who wishes them.

Those are not the goals I have for my life.

I still deserve to be valued.

Sometimes my achievement is to get up in the morning. I celebrate this.

It is to be able to type a sentence. I celebrate this.

It is to be able to pay attention to an audio book. I celebrate this.

My achievements have nothing to do with the majority’s definition of success.

Being wise does not require “intelligence”. I consider myself wise.

Intelligence, as defined by a normalizing society, is not a requirement to be a worthy human being.

I don’t allow others to define me, and to value me, according to their view of the world, of life.

I type to be heard, and to challenge assumptions.

If you say I am intelligent, you would be wrong.

If you say I am not, you would be wrong too.