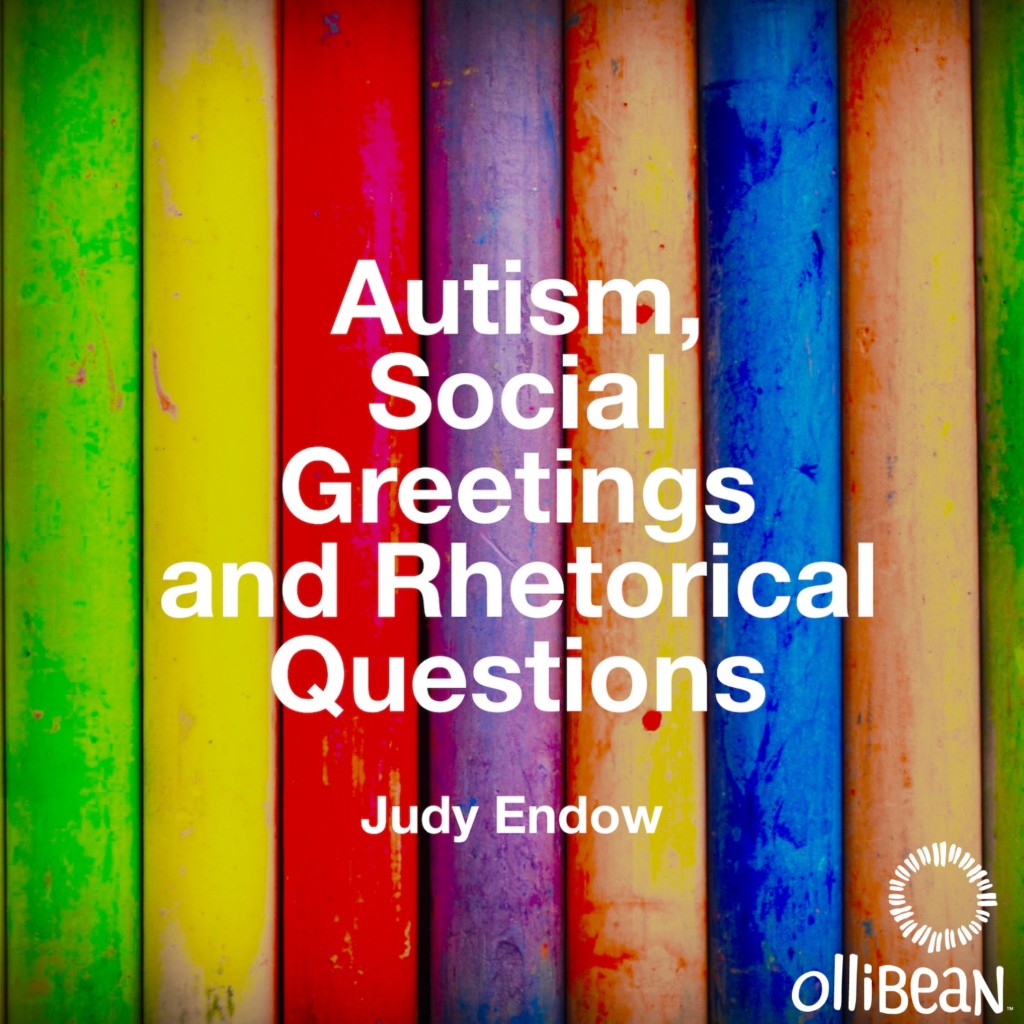 Autistic people may not automatically know how to respond to rhetorical social questions such as “How are you?” or automatically reciprocate in social pleasantries such as “good morning.” This is not because they are rude, obnoxious, don’t care, or any of the other assumed reasons people attribute to this behavior. Instead, it is because all social information is not automatically picked up and used by a person with an autistic brain. The autistic brain simply works differently. Even so, autistic people can learn those things their particular brain hasn’t allowed them to automatically pick up.

Example: I supported a 6th grader for an hour a day as he entered, checked in at the office, went to his locker, and did a one-on-one “check in” time with him before he left to go to his first classroom. Each morning when Loren arrived I would say, “Good morning, Loren.” Loren would either remain silent or say “Shut up” or “I know that.”

As we walked down the hall to his locker I would tell him it was nice to see him and ask, “How are you?” Loren either would remain silent or give me a detailed run down of all his scrapes and bruises, both current and from years passed!

Autism, Social Greetings and Rhetorical Questions and The Hidden Curriculum

Once I realized his autistic brain had not picked up the hidden curriculum information in regards to social greetings and rhetorical questions I set about directly teaching this to Loren.

2.  I wrote in the Greeting/Question such as “Good morning” and “How are you?”

3.  Next, blue index cards were used to write possible expected responses such as “Good morning” and “I am fine. How are you?”

4.  Yellow index cards were used to record each unexpected response such as “Shut up” and “Go away.” A blank card was used to indicate no words spoken.

Loren watched as I made the cards and put them under the columns of Expected Responses and Unexpected Responses. He studied this over, then removed the cards, mixed them up and announced, “I’m doing it myself this time.”

During his first few tries Loren wasn’t sure where to put the cards so I placed a blue card above the Expected Responses column and a yellow card above the Unexpected Responses column. This gave him the visual hint – blue cards in the blue card column, yellow cards in the yellow card column. (It is important to insure success when teaching unknown social information, thus the built in color coding is something I often use. Loren was familiar with my color-coded systems, understanding that if he simply matched the colors he would have the correct answers.) As soon as the color clue was supplied he could line up the blue and yellow cards according to color.

Now we needed to bring this information into everyday circumstances because even though Loren knew the information, he was not accessing it in real life situations such as when the school secretary said, “Good morning, Loren.”

Next, practice situations with the secretary were set up for the purpose of Loren using a new skill. We practiced five times in a row each morning. I carried the cards with me. When the secretary said, “Good morning, Loren” I gave him the blue cards, each with an expected response to this greeting. Loren could look through the few cards, knowing that any of the responses were okay – he couldn’t go wrong.

This system worked well and within a few days Loren said he didn’t need the cards anymore. What happened next surprised us both! Without the cards, Loren was not able to access the information. We discovered the cards needed to be physically present, even though Loren did not use them. I held the cards in my hand for a few days. Then, we left the cards in Loren’s locker. Sometimes, with a literal and concrete brain, this visual pairing with social information needs to be implemented with a gradual step down to successfully remove the visual.

In successive weeks we added more social greetings and rhetorical questions to our chart. Loren sometimes arrived at school telling me, “I’ve got another one for the chart!” He continued to use this visual system for the remainder of the school year to learn and sort out the information around social greetings and rhetorical questions. In addition, once mastered at school, Loren brought the visuals home where his family helped him bridge the new skills in expanded environments.