America, the CPRD, and the Global Plight of Disabled Children

A new United Nations report, “The State of the World’s Children“,  finds that children with disabilities are the least likely to receive health care or go to school and are among the most vulnerable to violence, abuse and neglect. With the most recent data available suggesting that 1 in 20 children aged 14 or younger (approximately 93 000 000) has a disability. it’s clear that we’re in the middle of a child welfare crisis. 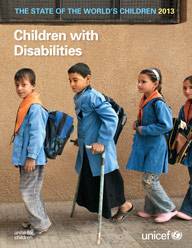 Not so, according to United States Senators who failed to ratify a United Nations convention designed to ban discrimination on the basis of disability and to ensure that those with disabilities are granted the same rights as all citizens. The Convention of Rights of Persons with disabilities was signed by President Obama and ratified by 127 other countries, but was seen by many Republican Senators as a threat to American sovereignty and an invitation to United Nations interference in the lives of American families that chose to home-school children with disabilities. These concerns, and fears that the CRPD would give the United Nations power to remove children with disabilities from their families, prompted Senator Rick Santorum to speak out strongly against ratifying the treaty. Read Santorum’s statement here

It’s interesting that so much resistance to the CRPD came from Republicans, given these facts:

1. It was negotiated and signed by George W. Bush’s administration in 2006.

2. It’s modeled on the Americans with Disabilities Act, signed in 1990 by George H. Bush.

3. It doesn’t require America to change any of its laws.

Read here for more information on why the CRPD doesn’t threaten America.

People with disabilities deserve the chance to be full, participating members of our communities, guaranteed the respect, dignity and opportunity that non-disabled people enjoy. For children and youth with disabilities, this requires accommodation in schools, effective transition planning, vocational training, transportation, and rehabilitation programs – and a recognition by politicians that working together with other countries to guarantee the rights of people with disabilities is something to be embraced, not something to be looked on with suspicion.

Read the New York Post editorial about the CPRD  here