The Benefits of Real Food 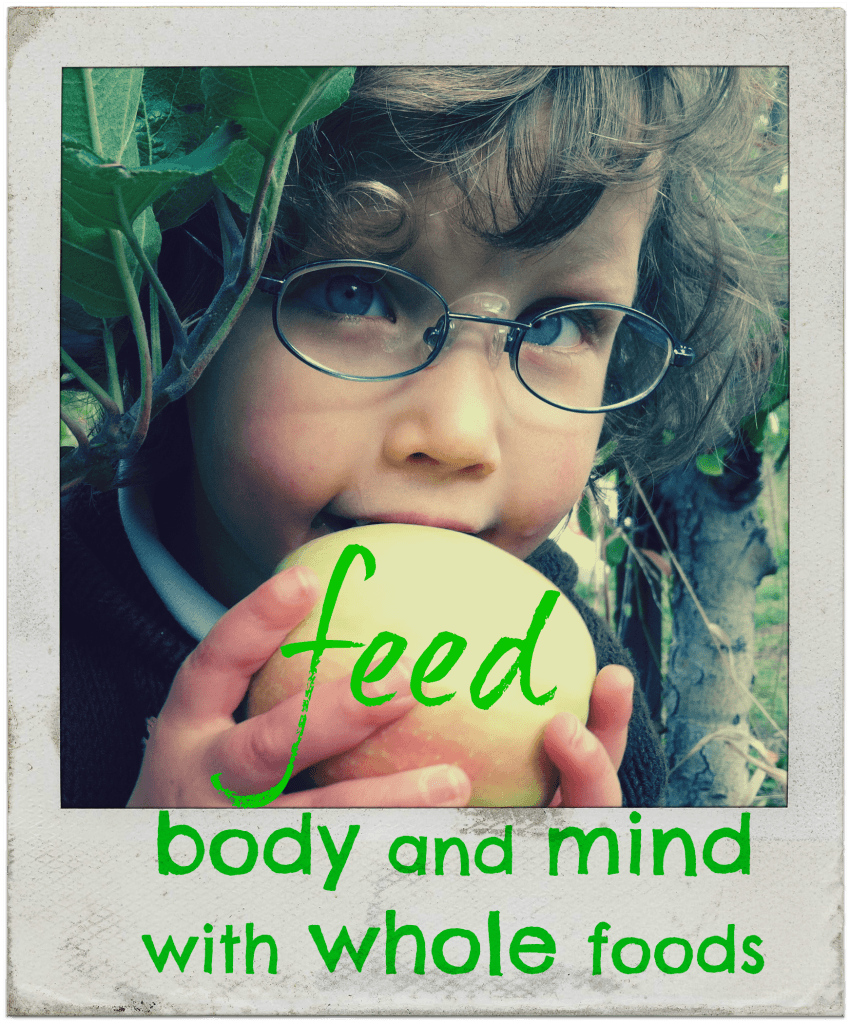 My first post on our blog Chasing the Spring was a little over a year ago. As everyone says…”where has the time gone”?! In looking back over this last year I remind myself, even though the topics of my posts have ranged from therapy to school to vacations to my own emotional status, one thing remains the same for me. My goal in beginning this journey of words was to share our experience, possibly provide assistance to someone in shoes like ours, and most importantly…to empower other families to do what is right for them in regards to their children’s health and well being. Central to this line of thinking has been our leap of faith with how we feed our daughter Kimberly. I dedicated a page to this story and can say for certain that the seemingly simplistic decision to make Kimberly’s food ourselves, just as we do her older sister – less the blending – has been a source of amazement for many. I have mixed emotions about this response. Shouldn’t it just be that simple? Truly though, I have to place blame squarely on the medical community for dissuading others from this path….this fact sickens me every time I think of it. Feeding our daughter a blenderized diet was life changing for our entire family, and that is not even slightly an exaggeration.

Here is the story: After over two years of struggling with our daughter’s diagnosis of failure to thrive and developmental delays we faced the decision to place a g-tube for her feeding/nutritional needs. Feeding Kimberly had become such a struggle on a daily basis, her diet regularly consisted of only one food item she would eat, sometime for days at a time. The act of feeding her was an hour or two per (tiny) meal, several times a day. Utilizing various distractions, encouragements, etc we had to constantly be creative and it was exhausting for all of us. She dreaded mealtime as did we. Months would go by at a time with no weight gain. If she got sick and lost weight it was heartbreaking. At three years, four months old Kimberly weighed only 21 lbs. She had not been on the “growth chart” since she was 6 months old. We attributed her extremely limited diet and lack of a desire to eat to reflux since birth and her oral aversions associated with her sensory integration disorder. To compound her issues the reflux had eroded her teeth severely, likely causing pain as well. The summer before the g-tube surgery she underwent extensive dental surgery to repair the damage.
We decided after much deliberation to proceed with the surgery. Upon receiving the g-tube in October 2009 we began giving Kimberly the standard fare: Elecare hypoallergenic formula through bolus feeds and with a pump overnight. Initially the formula feeding went ok. For so long Kimberly had been borderline dehydrated and malnourished, the influx of fluids and nutrients to her system was very helpful.

Soon after beginning use of the pump at night we began having difficulties. The line would kink, the pump would clog, and most disturbing was when she would vomit at night. Many nights she did not receive the entire “feed”. Being very limited with how much we could give her during the day (due to her intolerance of more than an ounce or two at a time), it was impossible to make up the “lost” calories from the night before. We kept detailed logs of what she ingested every single day and night.

Before long Kimberly became less and less tolerant of the formula. It seemed as though it took a very long time to move through her system and the limitations prevented us from giving her the calories she needed to gain weight/grow. About seven months after her surgery the vomiting occurred almost daily. I can still remember the awful smell of that formula. When we approached the doctor with this situation the recommendation was to give Kimberly low dose antibiotics to combat her “delayed gastric emptying”. This flew in the face of what we knew was right for her. Yet we found ourselves painted into a corner so to speak. We were 100% reliant on the g-tube and formula for her nutrition/calories. We had to find a way to get more into her. We filled the prescription and began giving her the antibiotics, along with the Prevacid she had been taking on and off since a few months old.

I began to research our situation feverishly. There had to be a better way. I learned that the Prevacid was likely causing more harm than good. Being an acid reducer (not affecting the actual reflux itself) it could be contributing to her inability to digest what was in her stomach effectively/efficiently. It causes damage to bones long term, and with the other undesirable side effects we decided to wean Kimberly off of it – which had to be done very slowly. We supplemented instead with digestive enzymes that I bought in capsules which I opened, mixed with water, and gave to Kimberly through her g-tube (Mic-key Button). 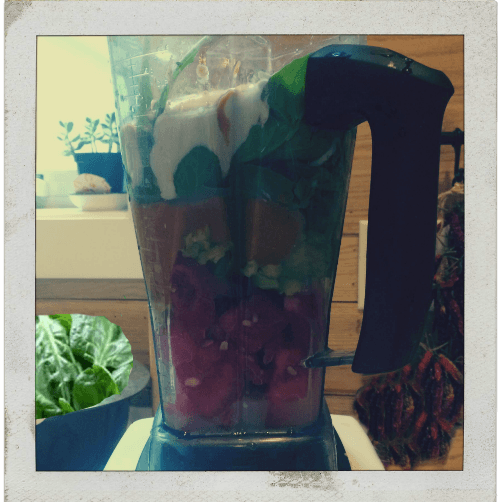 At about the same time we stopped with the antibiotics. We also stopped with the formula, switching over to real food. I determined that the residuals from the formula were collecting in her stomach, undigested. The single most helpful resource in this process was the Yahoo Group for Blenderized Diets. Reading information posted from adults who used this formula was priceless. It gave us a window into what our daughter was experiencing. The vomiting was a common theme. People described the feeling after ingesting the formula as if they had a brick in their stomach for hours. Other than the experiences described by these people I could not find medical literature to this affect. I find this very disturbing. I would love to work with medical professionals to figure this out and find a way to offer patients needing feeding tubes a diet of real food that is endorsed by their medical team. There is no reason why those choosing to use real food should be made to feel as if they are being “non-compliant” and not have support. That is the current state of affairs and it is incredibly frustrating. Especially when you know first hand how incredibly beneficial, and actually life changing, a blended real food diet can be for someone who needs it. This has been our experience.

We had some fear and initial hesitation, yet after the first day we were off of formula there was no more vomiting, we never looked back. The outstanding nutrients, and beneficial fats we are able to give Kimberly has changed her life and ours. Her physical appearance (hair, skin, etc) changed. Her speech/language development improved considerably, and her energy level was improved. We continued with the digestive enzymes at meal time and created a variety of blends to provide a well balanced diet. We often joke that she is the healthiest person in our house! We use a Vitamix blender that we purchased with a discount offered with a letter from your dr if it is for medical use. We have had our blender for over 3 years and use it multiple times a week for blends. It is amazing.

Kimberly eats orally as well, getting about 10-20% of her calories that way, and the balance is from her bolus feeds. Currently we give her four feedings a day (approx 7a, 11:30a, 3:30p, and 6:30p). Each feeding consists of five 60ml syringes of food, and 30 ml of water to flush at the end. When we ended the formula we stopped using the pump at night as well. We were easily able to get the calories during the day. Her “gastric emptying” was just fine. It was not her, but rather the formula that was the problem. The drs never suggested that possibility….We are 4 years into giving her a blenderized diet and feel wonderful about being able to feed her body and mind with whole foods. With all the other concerns and challenges we have, at least nutrition is no longer one of them. I long for the day when she no longer has the tube and eats orally, enjoying her foods and continuing to grow. One step at a time…

We are including some of the “recipes” we use along with approximate caloric values for reference. We aim for about 30 calories an ounce. We encourage fats, oils, organic produce, legumes, and meats, fresh off the farm eggs, and wild caught fish. A blenderized diet makes casein free-gluten free diets super easy. We make our blends about every other day but have also made a weeks worth and freeze half of it to ensure freshness. We do not include enzymes in the blends but rather give at the time of the feed if we are including those. We periodically give probiotics and liquid vitamins but not currently. If you are feeding someone with a g-tube and are even considering this option…DO IT! You will not regret it. 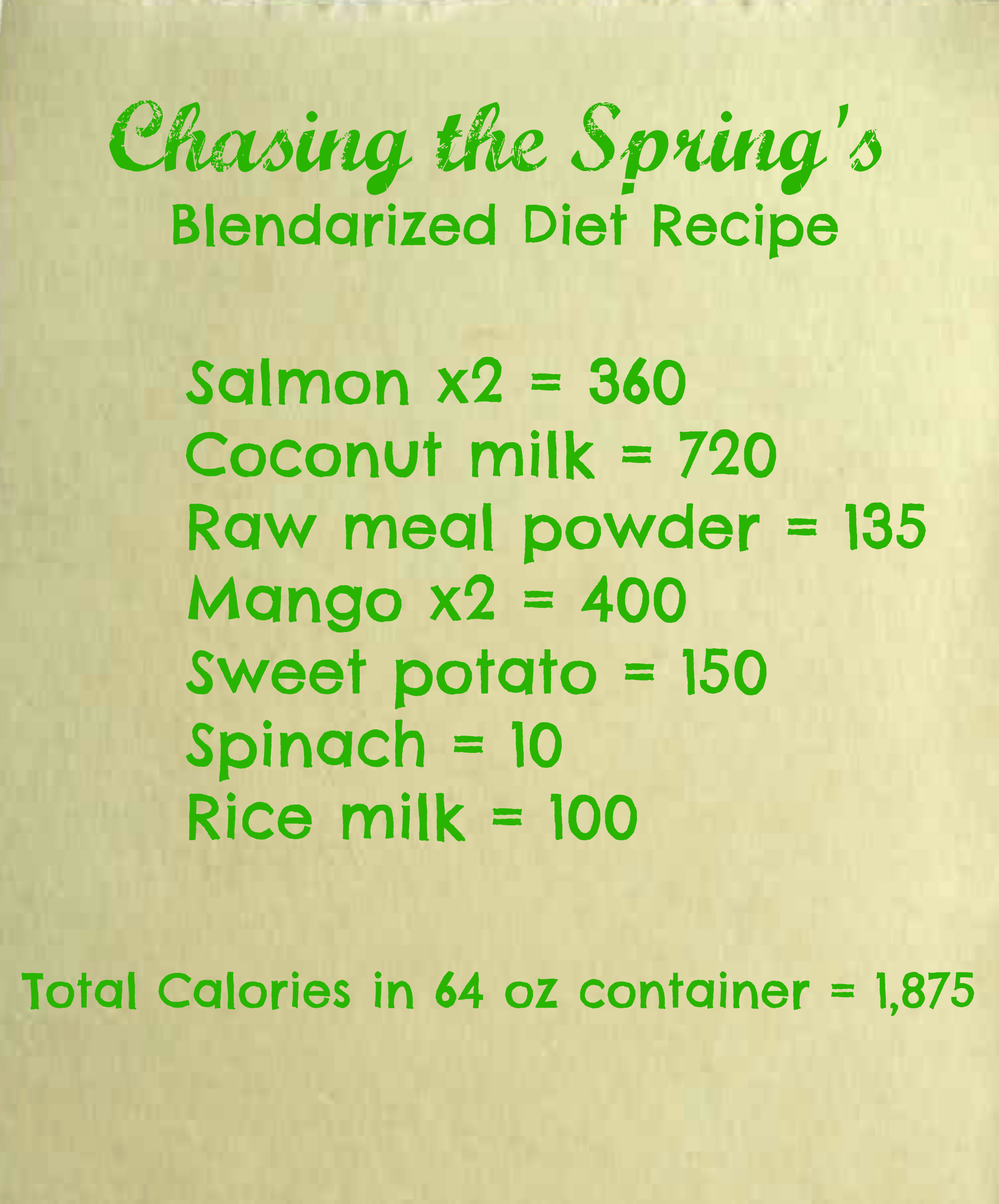 Read more from Dani Johnson on Chasing the Spring.

Editor’s note: The information in this post is not intended to replace a one-on-one relationship with a qualified health care professional or nutritionist and is not intended as medical advice.

About the Author: Dani Johnson of 'Chasing the Spring'