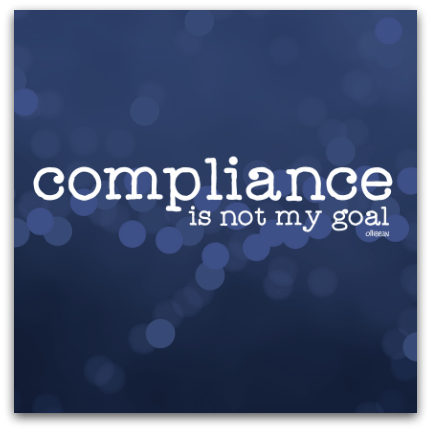 I had the opportunity to speak, as a public comment, during a meeting of the Autism Society, Florida Chapter. It applies mostly to the National leadership because I think it is past time for some things to change. What I said might not have pleased everyone, and it might have made some angry. But I stand by the words – compliance is not my goal.

It needed to be said though, not only to the Autism Society but to all organizations that say they “advocate” for autism. If an organization wants to help, it should not advocate for things Autistics don’t want (like Applied Behavior Analysis -ABA, for example). Real advocacy only happens when the group that can benefit from the advocacy is part of the conversation. Autism advocacy only happens if Autistics (not one or two token Autistics, but a large group) are deeply involved.

So, this is for all organizations, and its members, who believe we, Autistics, deserve the same rights and respect as anyone else.
Except for Autism Speaks. Autism Speaks is too full of hatred for Autistics to even acknowledge that we have human thoughts and feelings.
Other organizations can still become our allies.

This is what I said:

“I want to make a comment. Are you ready?

First, I think that the Autism Society of America, and all its chapters, need to move away from person first language and start using identity first language.

The idea that person first is the “acceptable” one is not true because most Autistics (independent thinkers) prefer identity first. The person first as used when referring to Autistics is a parent-initiated thing. We deserve to be heard. Actually, our voices should count more.

At minimum, you should use both. Of course, if an Autistic person prefers person first, then that person should be respected. But do not generalize to please non-autistics.

I, and many others, am proud Autistic and Disabled.
I am not “only” Autistic, but I am not “only” a white woman. Yet, nobody says I am a “person with whiteness femaleness”.
Besides, when you need to remind people that I am “a person”, you deny my humanity. Of course I am a person, this is pretty obvious.
Don’t ignore our voices.

Second, stop using, and reject, functioning labels. It is absurd, dismissive and disrespectful. Unless you can define “high” and “low” functioning, and then place each one of us in one little box, convincing us that we belong where you place us, you are simply making our lives much difficult. You should not use terms you can’t define and I dare you to define these.

Third, reject anything ABA. This compliance-training program says we are defective and does not allow Autistics to learn self-determination. Autistics who “succeed” because of ABA are obedient, pleasers, not necessarily independent thinkers.

And no, there is no “good ABA”. There are things every child, not only Autistics, needs to learn. Trying to “fix” what is not broken, trying to make us into your definition of “better”, and forced compliance, are violations of our autonomy, it is not acceptance.
There are better approaches.

Fourth, why haven’t you moved from awareness to acceptance? Haven’t you read or listened to all Autistic voices talking to you?”

After I spoke I was surprised, in a good way, by how some people stood and applauded me. I was not surprised by some pouty faces and some excuses: “my ABA is not forced compliance”.
I say: If it is ABA it is training into compliance.
“Autistic kids need to learn certain things”.
I say: the same things everyone needs to learn. Non-autistics are not subjected to many hours of training to look less who they are.

I will say it again: whatever one does trying to change the essence of who we are, by trying to mold us into ideals of “acceptable”, it is forced compliance.

Waiting for a response from the organizations who read this, and from the ones who heard me.