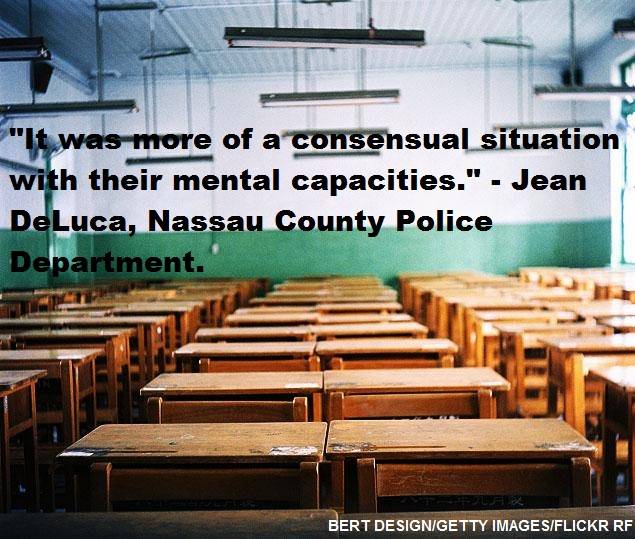 The fifteen-year-old girl known in the media as K.J. likely didn’t walk into her May 8, 2012 science class at Martin de Porres Academy thinking that she’d walk out having gone through one of the worst things a person can go through. And one wonders how the teacher in the classroom could have missed the fact that a student labeled with an IQ below 50 went through a ten-minute sexual assault involving three ninth grade boys.

Apparently, however, this is what happened afterward:

1. K.J. came home with blood in her underwear

3. The school eventually requested that the investigation be closed, saying that they’d “handle additional behavioral and social issues with training and additional counseling.” K.J.’s family wasn’t told about this until September 2012.

It only gets more disturbing.

In New York state, K.J. has too low an IQ to legally consent to sex. That law did not do her any good in this case, however. The Nassau County Police Department declared, because her attackers were also labeled with IQs below 50, that even though K.J. told police that she said “No” and “Stop” when the boys assaulted her (and had to be physically assaulted to keep her from escaping), the sex was consensual. They eventually decided that it wasn’t a matter in which they should be involved, as “It was not something you could arrest someone for,” said Jean DeLuca, a Nassau County Police Department spokesperson.

The spokesperson for the Nassau County District Attorney, Kathleen Rice, said that the DA was aware of the case at the time, but “referred questions to the police.”

Apparently safety within the education system and access to the legal and judicial system is only available to *some* young women in society.