Hashtag Hate and How Pride Can Prevail

Guest blogger Kara Ayers is the Advocacy and Dissemination Coordinator for The University of Cincinnati University Center for Excellence in Developmental Disabilities (UC UCEDD) and has been featured on Disability Blog the official blog for Disability.gov.

As a child, my family considered “hate” to be a bad word. We’re teaching my preschool daughter the same. Someday I will teach her the tragic impact of hate and the freedom that it has stolen and continues to steal from so many. For now-I don’t want her vocabulary or her mind limited by slurs and hate-filled language.

As someone who works in social media, I am familiar with the nuances of online lingo and trends. Hashtags it seems are picking up momentum. In the last month alone, I’ve been asked by co-workers, family members, and friends:

And I answer: A hashtag is a word used to unite a conversation across several people and across time. Some hashtags are funny (#isitfiveoclockyet). Others help people follow an event. I was an avid participant in the State of The Union conversation this year using #SOTU. Just today, I am live-tweeting and posting from the Ohio Disability Employment Alliance Conference using the hashtag #odea14. Anyone who cannot attend the event could follow my highlights and others who are posting using that hashtag. It also gives me the opportunity to connect with other people who are here so that we can continue these conversations after the event ends. In short, a hashtag is an idea, a belief, an event, or a theme shared by more than one and summarized by one word. Except when used in jest with exceptionally long or silly hashtags, you use a hashtag because you want others to use it too.

The latest hashtag trend in my disability community (Osteogenesis Imperfecta) is hurtful and I’d like to address it with my belief that love, acceptance, and pride do prevail. People-almost entirely parents without OI who have children with OI-have begun using the hashtags #ihateoi and most recently #FUOI. Some argue that these hashtags are an attempt to cope with some of the challenging aspects of our bone condition.

Indeed, broken bones are painful but our lives are not defined by suffering. 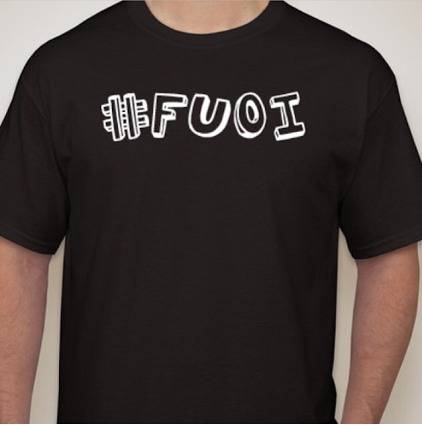 To carry the hashtag trend further, there’s even a t-shirt emblazoned with #FUOI. When addressing the designer, I was told the message was intended to counter the sorrow and suffering associated with OI. There are a few problems with this ideology. The first of which being-that is not what the hashtag says.

This hashtag says FU or states hate for a piece of me. It says FU to my family and my friends. In our culture-our language-there are few other ways to interpret these two words. Unlike someone without OI, I cannot-even if I wished to-pick and choose when I want OI to join me for the day. It is always with me. OI is not all of me but it’s a significant piece of my identity. Long ago, I began to find pride in my identity as someone WITH OI. Not because it was easy and not because it was popular. There will always be many more messages about disability should be overcome, disliked, and……hated.

I challenge those in support of a shirt with such a hateful message to reflect on whether they would wear a message stigmatizing another minority group. Would you end your post that shares a picture of a child of color with a hashtag of hate based on race? Would you wear a t-shirt stating FU to a particular religious group or to members of the LGBT community?

So what to do?

If you’ve posted a hateful hashtag in the past, it’s not the end of the world. Perhaps you didn’t know. Again-there are many more messages in society that support this way of thought. If you CHOOSE to continue supporting and spreading hate after gaining knowledge of how it makes others feel, that is a different act entirely. I’ve attempted to address individuals about the way this message IMPACTS me and others with OI. The INTENT may be different but perhaps if the impact is understood, I thought some might understand. This hasn’t been the case. True to history, hate is easier and more popular. True to my beliefs though-knowledge, acceptance, pride, and love prevail.

I challenge the disability community and social media at large to join us in solidarity. Let’s outnumber the hateful hashtags by posting about OI with the hashtag  #OIPride-or if you don’t have OI #PridePrevails. I am no longer concerned with arguing with people who have no intention of desire to see OI as anything but a negative and sorrowful existence. In the past, I’ve been drawn to this debate because it is the children with OI-the future of our community-who are particularly vulnerable to these messages, especially when they come from their very parents. Parents without OI who rally around messages of hate make a choice. I do as well #oipride #prideprevails.

Kara Ayers, PhD,  is the Advocacy and Dissemination Coordinator for The University of Cincinnati University Center for Excellence in Developmental Disabilities (UC UCEDD) and has been featured on Disability Blog the official blog for Disability.gov.

Isn’t it a Pity? The Real Problem with Special Needs

About the Author: Kara Ayers