I ALREADY AM A HUMAN BEING 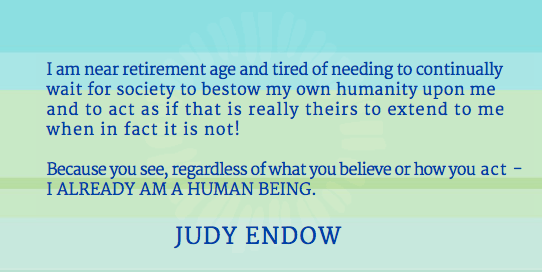 I do not know if you have ever thought of it this way, but it is a step up that today autistics have the opportunity extended to prove themselves human.

As bad as that is and wrong in ever so many ways it is a step up from 50 years ago when I was a kid and we were not even given any chances to try to convince anybody of our worthiness as a human being much less our intelligence. It is all so wrong and such a slow moving shift it is sometimes difficult to remain positive.

This past week I read two news articles on the same day that made me wonder if anything at all is changing in the attitudes of the general public in terms of knowing and accepting autistics for the human beings we are – YES, AUTISTICS ARE HUMAN BEINGS. Even when we do things differently based on our different neurology WE ARE FULL-FLEDGED HUMAN BEINGS. We do NOT need to first be made to act neurotypical before you grant us the status of HUMAN BEING because WE ALREADY ARE HUMAN BEINGS. I get so weary of reading sentences embedded in autism related news articles that seem to be based on an assumption that we are not truly human, but perhaps can be made into a human being by being forced to behave like a neurotypical person. Here are a few examples:

EXAMPLE 1: This study “examined the relationship between loneliness, friendships and well-being in 108 adults with autism aged 18 to 62 years. The study found that people with autism who have a group of good friends are less likely to feel lonely, depressed and anxious than those without many close friends.”
From: http://sfari.org/news-and-opinion/blog/2013/adult-focus

EXAMPLE 2: “A diagnosis of autism does not eradicate the essential desire in people to need intimacy. The desire is present, even if the means to achieve the desire – such as confident eye contact, an appropriate smile, looking and not staring – requires intervention by sources that understand autism. The main problem reported for the current lack of tools to help autistic people romantically is funds.”
From: http://www.autismdailynewscast.com/romance-and-autism-dating-is-more-than-possible-for-people-with-asd/3880/ashleyisaacson/

MY COMMENT: Autistics have human desires because WE ARE HUMAN BEINGS. The means to achieve intimacy (or to achieve anything at all connected with our own quality of life enhancement) does not depend on funds to create programs with interventions that force us to act neurotypical.

It is burdensome to have to continually try to convince so many people that AUTISTICS ARE TRUE HUMAN BEINGS. I so much appreciate my autistic friends and allies especially on the days I feel down about the way I am perceived as not quite a real human being. This is why we so much need each other – so we can take turns holding the space for one another when it seems personally hopeless. And onward we go living our lives to the best of our abilities sometimes taking the tickets others extend to us to be part of their world.

And when people don’t willing give me a ticket to participate in the human race – well I hate to say this, but I have learned how to sometimes steal tickets and force my way in at times. I hate stealing, but sometimes it is better than being denied access. The devil part of me wants autistics to go to stealing tickets classes rather than social skills groups. It would be great to learn to take our place in the world being who we are rather than being made to act the part of who we are not as the only way to be allowed access to membership in the human race.

Inclusion is great when it happens, but it puts me in the position of being dependent upon your benevolence to extend it to me. Even though inclusion is meant to be a good thing, and it often is, inclusion also practically turns out to mean that you get to decide when, where, if and for how long I will be given the ticket to be part of humanity.

I am near retirement age and tired of needing to continually wait for society to bestow my own humanity upon me and to act as if that is really theirs to extend to me when in fact it is not! Because you see, regardless of what you believe or how you act – I ALREADY AM A HUMAN BEING.