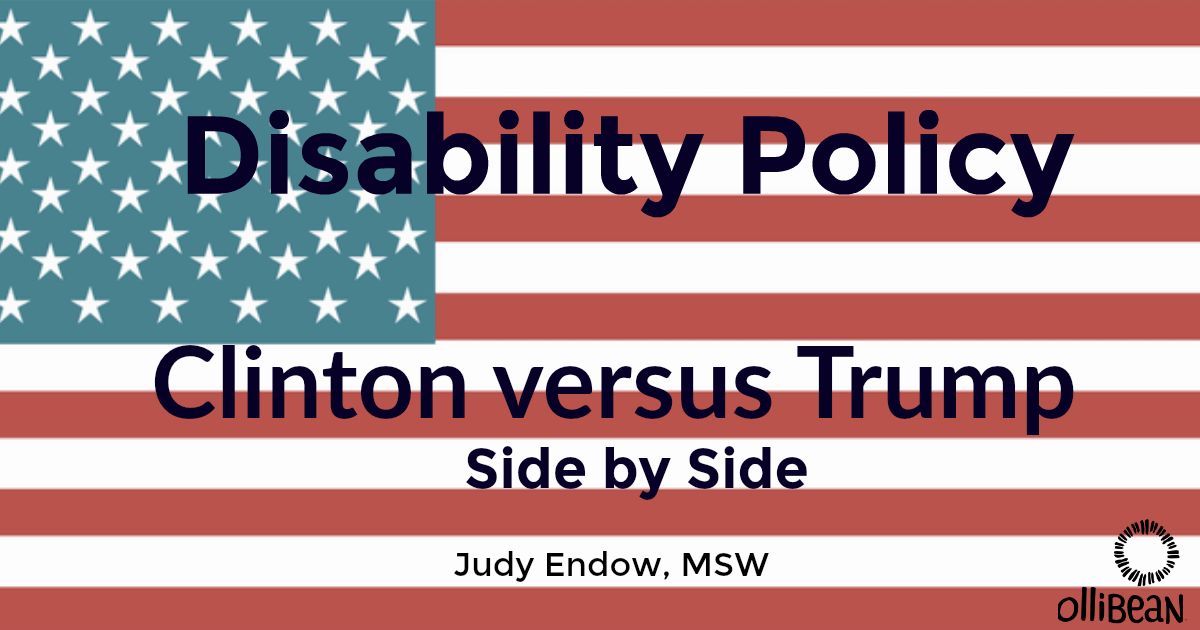 In a few weeks will have elected a new President of the United States. Many of us get our information from watching TV. The trouble with this is we only get the information the TV decides is news worthy. Unfortunately, most things concerning disability are not newsworthy. This means that rather than seeing a candidate’s disability policy on the evening news we are more likely to see a candidate’s latest purported scandal whether it is about deleted emails or admitted past sexual abuse. While these things can be informative, I think it is helpful to also understand where the two major candidates stand on issues directly affecting the disability community. Here is some of that information put side by side for comparison.

Trump: There is nothing specific on Trump’s website regarding any plans for any disability in particular. However, I do remember a few months back there was at least one line that said he wanted to expand mental health coverage. I believe it was in reference to veterans.

Clinton:  On Clinton’s website a comprehensive plan for autism and for mental health is outlined in detail along with her plan for combating HIV/AIDS both in the United States and abroad.

Clinton’s autism plan is quite comprehensive covering many areas such as expansions in early screening and insurance coverage. Additionally, several life span issues affecting autistics are addressed including plans for targeting bullying in schools, getting assistive technology to those who need it, life span caregiving for those who need it along with community living options for adults. I have just learned this morning that part of the research she is in favor of funding includes genome mapping which, if realized, will undoubtedly lead to less autistic people being born.

Trump: He plans to repeal Obamacare, going back to insurance coverage as we had before Obamacare became law. In the free market health insurance plans denial of coverage for pre-existing conditions would come back into play. Additionally, the coverage of adult children to age 26 that the Affordable Care Act brought about for us all goes away leaving many of the nations young adults uninsured. Workplaces would not have to offer health insurance to employees.

Insurers would be free to offer any plan of their choosing in any state of their choosing. All health insurance premiums would be tax deductible. Trump’s plan to reduce prescription drug costs is to get the drugs from other countries where they are cheaper, but may not meet the quality and standards of our country. He supports tax-free health savings accounts.

As for Medicaid, Trump’s plan is to turn it over to the states through block grants allowing each state to use the money as they see fit to provide some or all of health care costs to Medicaid eligible individuals.

Clinton:  She sees affordable healthcare as a basic human right and would expand the Affordable Care Act (Obamacare) and apply fixes to the parts that are not currently working well. Clinton’s goal is universal health coverage for all Americans. At this time she plans to leave Medicaid intact and expand it’s coverage to include all low-income citizens.

Clinton’s plan is to reduce co-pays and deductibles. She further plans to reduce prescription drug costs through bargaining. Mental health treatment is slated to become part of ordinary healthcare. A specific autism plan includes increased access to services across the lifespan.

Note: In the past children with complex or severe medical conditions were often institutionalized. Today it is more common for families to receive a variety of support services that allow their children to remain home while receiving the medical care they need rather than being placed in institutions. The funding for these services comes through Medicaid Wavers, which turns out to be less costly than institutionalization.

Trump: No record can be found of Trump ever addressing this issue specifically. However, he has stated that mental institution and mental health programs in this country need to be reformed without giving any details on how he proposes to do so.

Clinton:  There are numerous plans on Clinton’s part which include

In conclusion, it is helpful to look at these candidate’s websites and to listen to their campaign speeches. It is also important to me to see how they have treated people with disabilities over the course of their own life and during the course of this presidential campaign.

While Trump has only discussed disability in reference to veterans and has publically mocked a news reporter with a disability, Clinton has spent her life working on behalf of individuals with disabilities. She has outlined plans to support people with disabilities to live in integrated community settings, to improve employment with fair wage opportunities and to provide tax relief to caregivers. Clinton has been the only candidate to give an entire campaign speech on disability rights. She is the only candidate to articulate both a comprehensive plan for mental health and a comprehensive plan for autism.

For me personally, even though I am well able to compare and contrast where the candidates land on issues I also have a personal question I ask of myself before voting.

As President, who will put each of us closer to the reality of life, liberty and the pursuit of happiness – Trump or Clinton? For too many disabled people alive today this has not ever been reality.