I think in colors. My thinking colors have sound and movement. When I hear spoken words my neurology automatically goes for the match – a match for the words I hear to a familiar concrete picture of something in the world outside my skin or to an internal picture I have stored in my memory.

The phenomenon of mist rising from the earth became the visual match for the new words I imagined to be about the world’s tail. For most of my life I thought this literally was this early morning mist was indeed the earth’s tail. I thought that people were somehow able to physically grab onto this tail and when they did so they indeed had the world by the tail! To my literalness this made perfect logical sense.

I had always noticed the sun sparkles and the interaction of the sun sparkles with the earth mist. In fact, as a small child, they were often more salient to me than the people in my world. Most times I preferred them to people. I had often tried to touch these sparkles, but now I had a new mission. I wanted to actually catch this tail so I too might have the world by its tail! As a decades older person, a few years ago I used acrylic paints to paint some of these misty tails. Here is one example with many more at my website www.judyendow.com 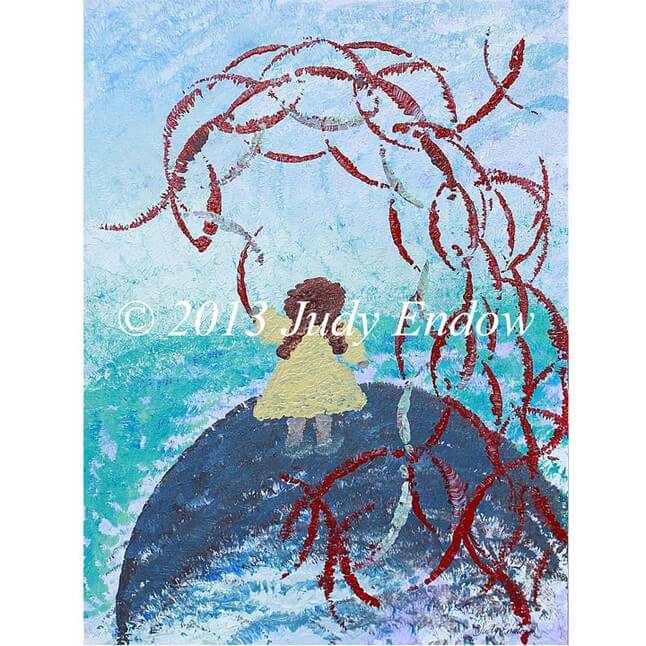 “Earth Tail Mist” a painting by Judy Endow .Painting of girl with a yellow dress land brown pigtails. Her back is to the viewer. She is standing on blue ground holding the “tail of the earth’s mist” which is represented by strands of grey and brown. The sky is blue and water is aqua. Across the photo are the words Judy Endow and copywrite symbol.

A. Rote Repetition is NOT Evidence of Comprehension!

People with autism are often visual thinkers. It is not something we decide, but rather the way our brain handles information. We do not know when we are little that most other people think with words rather than with colors and pictures. This makes it difficult in school as delivery of information quickly becomes language-based as pictures drop away after the first few years.

This dramatic change in materials in the United States occurs at the third grade level when text based instruction becomes predominant. For me it was hard to think about or understand ideas that were not concrete ideas. Basically, if my brain could not translate the words I heard into a concrete picture in a few seconds, as a young child I would not be able to pick up the meaning of the words being spoken. Even though I did not understand the meaning I was able to repeat the words. For example, when prompted I could repeat the teacher’s instruction to use quiet voices even though I had no idea what the words meant because no picture popped up in my head to equal those words.

1. Is your youngster a visual thinker?

2. Do you use concrete language along with pictures as needed?

B. Non-compliance or Comprehension Constraint?

When autistics are able to recite your instructions or repeat an admonition and then do not follow the instruction or admonition do not assume willful non-compliance. Instead, check for comprehension. If the autistic is a visual thinker ask him to draw or show you what the instructions or rule looks like. If a visual thinker cannot do this, he likely does not comprehend the words you are speaking even though he may be able to repeat them quite accurately. Children with ASD have been shown to perform basically normal for age in word decoding, but lower than age expectation in reading comprehension. (Minshew et al, 1994,  Myles et al, 2002, Nation et al, 2006, Newman et al, 2007, Asberg et al, 2008, Asberg et al, 2010)

3. When your student’s behavior has the appearance of willful noncompliance do you stop to ascertain comprehension before ascribing meaning to the behavior?

People with autism don’t automatically pick up the meaning of idioms. However, they are able to learn the meanings of idioms by direct teaching. “I’ve got the world by the tail” is an example of an idiom. Sometimes an autistic will automatically assign a literal meaning to an idiom and then assume everybody else shares that literal meaning because it makes sense to him! That is what I did in the above example using the idiom “I’ve got the world by the tail.”

5. How will you teach the meanings of idioms and other kinds of

6. Do you check for shared meaning when it comes to idiom usage and 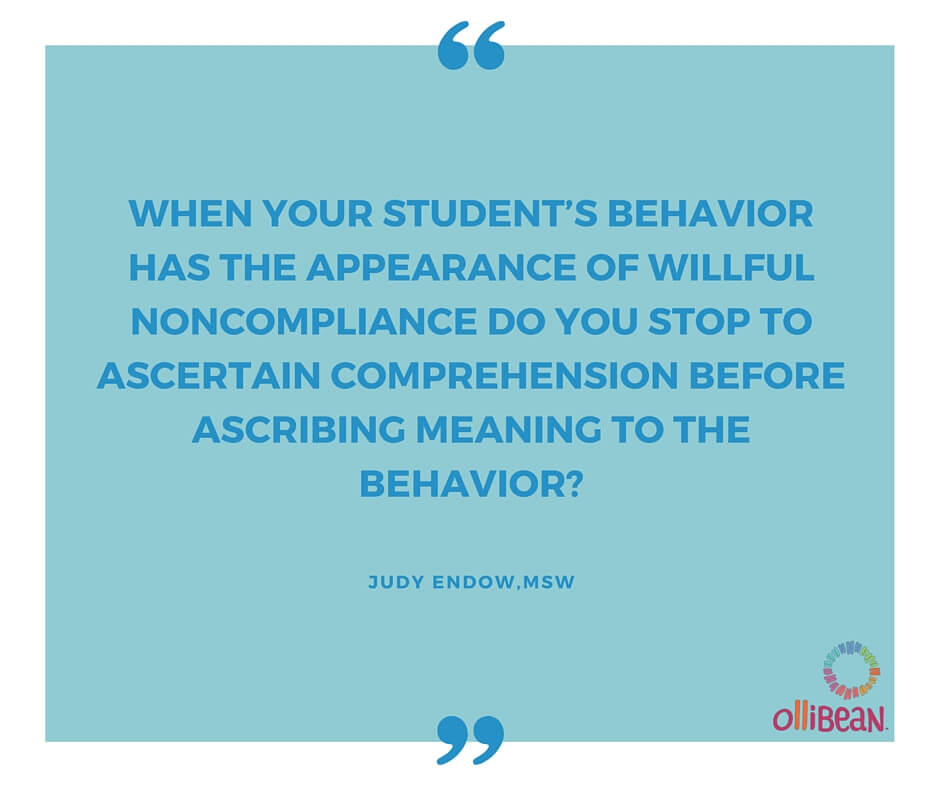 When your student’s behavior has the appearance of willful noncompliance do you stop to ascertain comprehension before ascribing meaning to the behavior? Judy Endow, MSW on Ollibean. Ollibean logo is a circle made up of equal signs of different shapes, colors, and sizes.

skills in high-functioning Swedish children with autism spectrum disorders or

comprehension, word decoding and spelling in girls with autism spectrum

and predictors. International Journal of Language and Communication Disorders,

achievement in high functioning autistic individuals. Journal of Clinical and

Syndrome. Focus on Autism and Other Developmental Disabilities, 17(1), 44-47.

ability in children with autism spectrum disorders. Journal of Autism and