#AutismSpeaks10 – Time to Shut Up 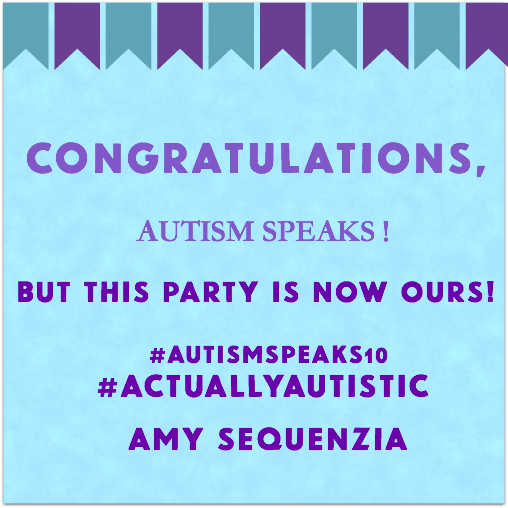 Autism Speaks is celebrating 10 years. 10 years of hate and hateful messages directed at Autistics. It has asked us: “how has Autism Speaks touched your life?”

Autism Speaks took the question to social media, Twitter in particular, to promote the anniversary.
This move proved the old thinking, the arrogance of Autism Speaks and how it dismisses Autistic voices.
We are many, we are proud, we have pluck, we are witty, and we will not be silenced.
Twitter became Autistic Headquarters, the hashtag was hijacked and used for education. And for fun.

I decided that I wanted to join the celebration.
Here are some ways Autism Speaks has touched my life in the past 10 years:

It has tried to make me believe I am a burden, a tragedy, a cause of suffering, unworthy, a tsunami, a health crisis, a side effect of vaccines, not quite human, a “changeling”.

It has blamed me for all the economic, social and emotional woes of the world.

It has tried to silence me every day, for all 10 years.

It has hated me every day, each day more than day before.

It has tried to make me compliant through “therapies” akin to torture.

It has thrown on my face its disdain for my life, while sympathizing with murderers of people who look a lot like me.

It has financed eugenicist research, sending the message that Autistics are an expendable group, not deserving of human existence.

It has devalued every part of me, every aspect of my life, every meaning of my existence.

But I will celebrate #AutismSpeaks10. Not only because it is too much fun to see the organization lost inside its own attempt of self-promotion, but also because this will counter the 10 years of lies and dire predictions spun by the Autism Speaks propaganda machine.

Contrary to what Autism Speaks wants the world to believe, and despite all the money and influence Autism Speaks has and uses in an attempt to silence us, there is this:
We are not silent
We are prouder
We are louder
We are many, including young autistics, including very disabled Autistics
We are non-compliant
We are non-normative
We are not backing down
We are badass
We stim with determination
We flappy with every tweet
We can own the internet with words of non-conformity
We can own the internet with words of Autism Acceptance

Just check your hashtag on Twitter. #AutismSpeaks10 (1)
Check this other hashtag too: #ActuallyAutistic

Congratulations, Autism Speaks!
But this party is now ours!