Autism and Thinking with Colors

I think in colors. My thinking colors have sound and movement. When I hear spoken words my neurology automatically goes for the match. When I was a girl, I heard the saying, “I got the world by the tail.” Immediately, the matching pictures of tail started popping up in my head. It’s like having a personal version of Google Images.

The initial picture search produced a variety of tails of animals. Then, there came the images of the ground mist I saw each morning when I went outdoors after breakfast. I assigned the world tail words I heard to this literal tail meaning that enabled me to name the pictures that had popped up in my head.

Specifically, I assigned this new tail meaning to the interaction of the sunlight and misty water particles I could see rising up from the earth’s surface whenever I was outside. For most of my life, I thought this literally was the earth’s tail.

Furthermore, I thought that people were somehow able physically to grab onto this tail and when they did so they indeed had the world by the tail!
I had often tried to touch these sparkles, but now I had a new mission. I wanted to actually catch this tail so I too might have the world by its tail! I am glad this was the 1950’s because children played outdoors many hours. I was not interrupted in my efforts of trying to catch the earth tails.

Today, this would be called “a behavior” and more specifically would be labeled “stimming.” Unfortunately, today some would try to intervene and stop me from engaging in this behavior. Back then, it was just thought to be my way of playing. I used this environmental phenomenon of ground mist interacting with the sun sparkles to make sense of the progression of time across the day. It allowed me to be able to predict what would happen when (lunch, naptime, setting the table for dinner, etc.). I am glad nobody took my mechanism of sense-making away from me!

People with autism are often visual thinkers. It is not something we decide, but rather the way our brain handles information. We do not know when we are little that most other people think with words rather than with colors and pictures. This makes it difficult in school as delivery of information quickly becomes language-based as pictures drop away after the first few years. This dramatic change in materials in the United States occurs at the third-grade level when text-based instruction becomes predominant.

For me, it was hard to think about or understand ideas that were not concrete ideas. Basically, if my brain could not translate the words I heard into a concrete picture in a few seconds, as a young child I would not be able to pick up the meaning of the words being spoken. Even though I did not understand the meaning, I was able to repeat the words. For example, when prompted I could repeat the teacher’s instruction to use quiet voices even though I had no idea what the words meant at that moment because no picture popped up in my head to equal those words (Endow, 2013). I was often labeled stubborn and noncompliant based on other’s interpretation of my behavior. In reality, I was doing the best I could in the moment to participate and do what was asked of me by the adults.

Because autistics have different operating systems, we are misunderstood in many ways. Our operating system visits different, and yet often intense, experiences of aspects of the world that others never seem to notice at all! I would like to end with a poem illustrating the huge impact mismatched colors have on me.

Colors are something her eyes can readily see

and when colors match
they tend to give back
a comfort to her eyes.

But when colors don’t match she can get distracted

and sometimes finds it harder to function
when her attention needs to be given
over to inside-her-skin physical senses.

If world-people could see what happens inside to her body

Her eyes start hurting as if they are burning.
Sometimes tears form and leak onto her face.

kin
not getting along,
choosing sides and
warring with one another.

This causes a physical aching.
Her muscles get sore and tired

Over the years she has learned that for her 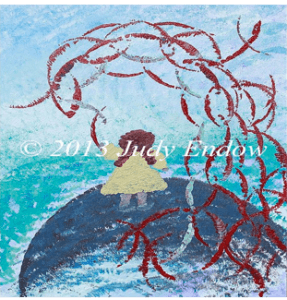 Outside, time dawns bright for me
While Misty Earth is making
A bright New Tail that rises up
Then back to me for taking.
(Endow, 2013, p.43)

Painting is EARTH-Tail Mist by Judy Endow
Note: Greeting cards and prints in three sizes are available for order at www.judyendow.com

Judy is an autistic author and international speaker on a variety of autism related topics. Read more from Judy on Ollibean here and on her website www.judyendow.com.