Sometimes a person with authority over another engineers a consequence for certain behaviors as a way to decrease the frequency of unwanted behaviors.

One way people learn is from consequences. For example, if you leave your car parked outside with the windows down and it rains, the natural consequence is that your car seats will get wet. Sometimes a person with authority over another engineers a consequence for certain behaviors as a way to decrease the frequency of unwanted behaviors. For example, a mother or a caregiver might decide that if hitting occurs at the park there will be no going to the park for the next two weeks. This sort of engineered consequence for unwanted behavior works for most people most of the time. It is why we use it to successfully teach our children to be responsible citizens – responsible for themselves, their behavior and their belongings and beyond.

These kinds of consequences rarely work well for individuals with autism.

For consequences to be effective in deterring future behavior, a typically functioning brain needs to be in place. For example, if an individual is prone to hitting others when at the park we decide that because he very much enjoys going to the park, the consequence of not going to the park for two weeks will help him to not hit or at least hit less when he does go back to the park.

The underlying brain function that causes this consequence to be helpful in reducing hitting is very intricate and is based on reliability of connections between many areas of the brain. In practical terms it means that in order for this consequence to change the hitting behavior, at minimum, these elements must all function smoothly for the person receiving the consequence:

Most people have brains that can accomplish all the above bullet points. However, people with autism do not. Autistic people generally have brains that do not support the last bullet point. Remember, an autistic brain means the connections between areas of the brain are weak making it difficult for the brain to pull together information from the various brain regions – the very thing needed for consequences to change future behavior.

After a time of bigger and bigger consequences, parents, teachers and caregivers start blaming the person with autism as if he wants to be a bad person. They say he is making poor choices and ascribe character flaws such stubborn and mean. It doesn’t turn out good for anyone, including the autistic.

Ways to Get a Different Outcome

Once you understand autistic brains will most likely be unable to attain the last bullet point in the above list – not because the individual consciously choose this, but because of the brain functioning available to them  – it would make sense to stop using consequences in hopes of changing behavior. But, we still have the hitting behavior. What can we do instead? Here are some ideas that have worked for numerous autistics of all ages whom I have worked with:

If the behavior is escalating in nature; i.e., if you can predict when it will occur because you can see the build up then you can prevent the behavior by intervening very early on rather than waiting until the last minute when it is impossible to stop the behavior from happening. In escalating behavior the physiological fight/flight kicks in right before the behavior occurs. This means the individual is operating on survival instinct, feeling he is fighting for his life, no matter how small and non-life threatening the situation actually is in the moment. Thus, intervention when the behavior is occurring fails. Successful intervention is at the beginning stages. For more information please look at Outsmarting Explosive Behavior: A Visual System of Support and Intervention for Individuals With ASD.

If the behavior is not escalating in nature, remember the reasons an individual gets an autism diagnosis and address those areas – communication, social, specific deep interests, and sensory. In light of this, here is what I do to help prevent unwanted behaviors when out in the community. 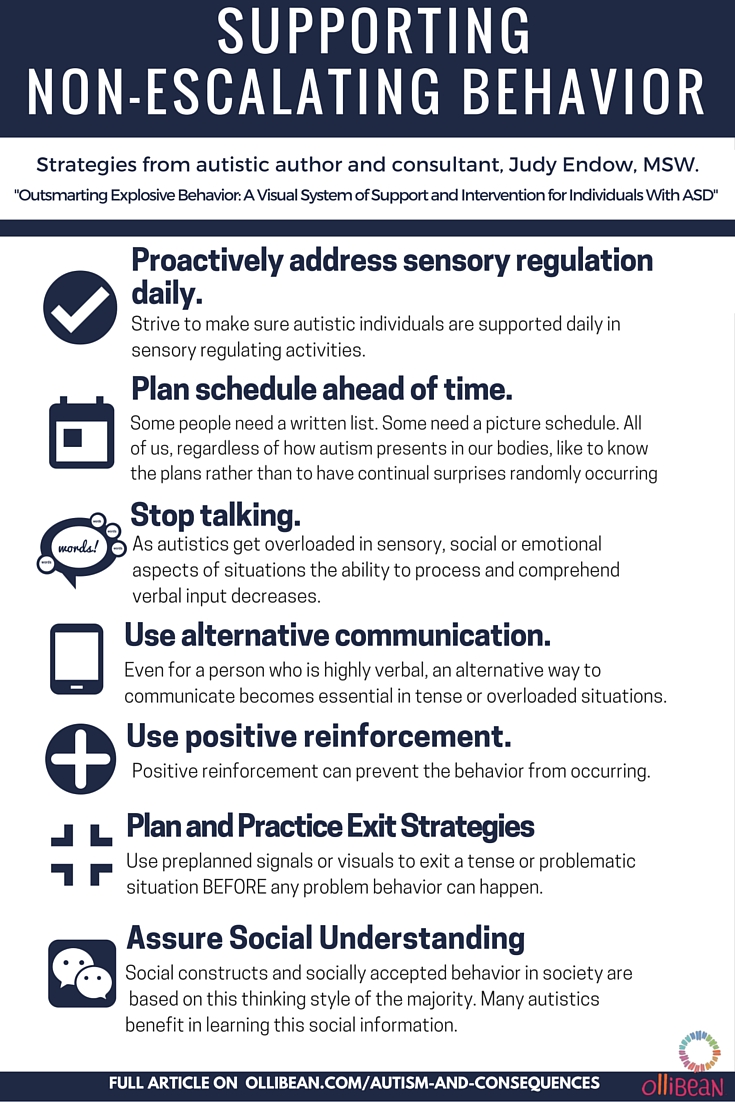 Judy Endow, MSW, maintains a private practice in Madison, Wisconsin, providing consultation for families, school districts and other agencies. Judy does workshops and presentations on a variety of autism-related issues. Email: juden4@hotmail.com