Joe Flacco Pledges to No Longer Use the R-Word

Baltimore Ravens quarterback and Superbowl MVP Joe Flacco has made a commitment to no longer use the R-word, joined by teammates Ed Dickson and Gino Gradkowski. The three men signed the pledge not to use the R-word anymore from the Spread the Word to End the Word website on May 20 and had their photos taken with representatives from the Maryland Special Olympics. 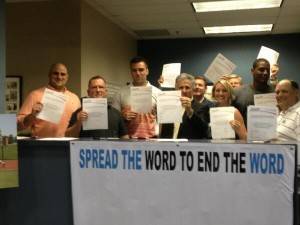 Flacco’s commitment to the movement to stop use of the R-word comes on the heels of using it during Superbowl week at a press conference. He apologized the next day, concerned that his “bad choice of words” would damage his long-standing positive relationship with the Maryland Special Olympics.

The fact that someone with a long-standing positive relationship with the Special Olympics organization could so easily slip and use the R-word (read the complete quote here) is unsettling enough. What’s even more unsettling is peoples’ reaction to both the original story about his slip and apology and to his commitment to no longer use the R-word. Reading the comments on the site that originally reported on this story in particular, I was  saddened (and shocked, quite frankly) at the number of people who still think that upset over use of the R-word is focus on a non-issue, political correctness run amok, and evidence that the  “PC Police” are are “demanding that accepted words in the English dictionary cannot be used in public.”

Since when is suggesting that people be treated with respect “demanding” anything?

We need to recognize that the R-word, because of the connotations that it’s picked up over the years, is just as much a slur as any based on ethnicity, gender or sexual preference. Yes, the R-word has been tricky because “mental retardation” has been a diagnostic term, but that will no longer be true pending the release of the DSM-V. It’s time to eliminate the R-word from our vocabulary, because it’s not respectful to people who have been labelled as having an intellectual disability.

And if you don’t believe me, ask them.  If you’re one of the people who wants to continue to insist that the R-word is okay to use, put your money where your mouth is and at least have the courtesy to find out for sure from the people who could potentially be hurt by your words whether that’s actually the case.

It’s the respectful thing to do.

I can predict what their answer will be.

I encourage everyone to go sign the pledge not to use the R-word anymore at Spread the Word to End the Word. It’s a small way to make a big difference. Way to go, Joe Flacco, Ed Dickson, and Gino Gradkowski for making this commitment to respect people who have been labelled as having an intellectual disability!